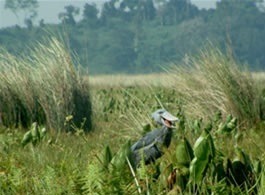 Mabamba swamp is one of the famous birding hot spots that is always encountered by birders on birding safaris and tours in Uganda. Positioned on the shores of Lake Victoria in a narrow bay fringed by counts of papyrus, Mabamba wetland lies within the Mpigi district.
The Mabamba swamp is dominated by Cyprus and Miscanthus species however there is a narrow strip of open water and a patch of Nymphea caerulea. The Mabamba swamp also has Cladium mariscus areas and drifting islands of papyrus islands which makes it lovely to encounter on Uganda safari tours. The Mabamba swamp is part of the Waiga bay south west of Nakiwogo lying in the west of Entebbe International Airport where travellers on safaris and tours make their first step in Uganda.
Listed among the Important Bird Areas of Uganda by the Birdlife International, its close proximity of the swamp to Kampala provides a perfect excursion for time constrained birders to have a glimpse of Ugandan specials including the vulnerable shoe bill stork which is the most highly sought bird on Uganda safari tours.
Besides the shoebill stork, Mabamba swamp also has other impressive bird species like the migrant Blue Swallow, White-winged Tern, Gull-billed Tern not forgetting Papyrus endemics like Papyrus Yellow Warbler and Papyrus Gonolek. The range of other species like the goliath heron, waders, Squacco Heron, Spur-winged Goose, Lesser Jacana, and thrive in the swamp and can form part of your excursion experience.
Uganda safaris/Uganda safari News
Prime Uganda safaris & Tours Ltd