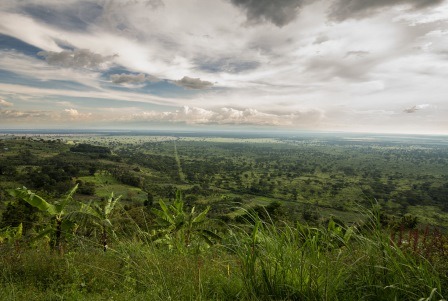 The Uganda Wildlife Authority – the national body that is responsible for the management of the national parks in Uganda working in conjunction with Uganda Security Personnel have evicted over 3000 local people from the Uganda Safari destination of Queen Elizabeth National Park following the illegal settlement at the beginning of this month.
The local people who had settled on a considerable portion of land close to Kasenyi and Katunguru fishing sites were on Tuesday Sept 1st evicted from their newly settled ground. According to them, they had intentionally settled in the park since government ignored their plea to return the land that was made a section of the park illegally. The local people require the four (4km) of the park land to be degazzetted for them.
The local people claim to have been fighting to meet the minister in charge but all in vain and this prompted them to claim the mentioned land in the any means possible. The locals further noted that they have kept patient for four (4) years but unfortunately the government has intentionally kept a deaf ear. They complain of being killed by the wild animals and yet no compensation.
The authorities including the Uganda police in the region had to intervene so as to stop the government land from being encroached on. The park authorities noted that the issue is before the tourism Minister awaiting the response.
Queen Elizabeth National Park was formed in the year 1952 first as Kazinga National Park and later adopted the current name to commemorate the visit of the Queen of England in 1954. Its located in the south west of Uganda in the western rift valley and features varied landscapes including open savannah, forested landscape and the wet ecosystems that include swamps and lakes. It features verdant wild game including four of the big five except Rhinos and its 45km Kazinga supports great hippopotamus concentrations and Nile crocodiles that make it a favorite destination for world travelers intending to do safaris to Uganda. Stretching over a geographical spread of 1,978km, Queen Elizabeth National Park support has the greatest bird Species in the whole of Uganda and East Africa amounting to over 600 Species and futures the unique tree climbing lions in it southern section of Ishasha.
It can be noted that Uganda’s protected areas have been prone to encroachment and the government has in many times reacted positively degazetting the protected land for human settlement. The cases include Mount Elgon National Park and Lake Mburo National Park. It can be noted that the growing pressure arising from the rapid population increase in Uganda is a threat to these protected sites. With country still engulfed in subsistence production and peasantry class still in search for the virgin lands to practice their traditional agricultural practices, one can note that human encroachment in protected areas some of which are destinations for travelers on Uganda safaris is not yet ready to come to an end. However, the government has adopted the collaborative management where the communities are engaged to understand and appreciate the value of conservation and in return find a justification for the continuity of these protected areas.