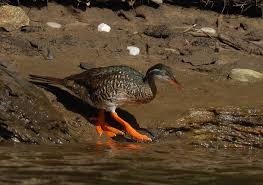 Scientifically referred to as Podica senegalensis, the African fin foot is noted to be a water dwelling bird Species thriving in the lakes and rivers of Sub Saharan Africa including Uganda where it is explored on birding safaris in Uganda.
The African Finfoot is famous underwater specialist bird featuring a long neck, bright red and lobed feet and a striking sharp beak. The plumage of African finfoot varies by race and is generally pale underneath while the top is dark. The males are usually darker than the females and it somehow looks like the torrent duck of South America.
Regarding the Habitat, the African finfoot is distributed in various habitats across the continent of Africa in places where there are streams, lakes and rivers with good cover. This habitat range features wooded savannah, the forest, flooded forest and the mangrove swamps. These Species thrive more in the woodland savanna and forested landscapes along the streams that are permanent with dense growth of Syzygium guineese along with distinct reaches of thick wooded rivers, pool edges, dams and lakes with adequate vegetation along their banks especially with reeds and branches that are overhanging and the dense beds of papyrus that might be far from the shore. The African fin foot tend to avoid stagnant or the water that is flowing faster.
The African fin foot thrives on aquatic invertebrates that feature both adults and larval mayflies, crustaceans, dragonflies along with snails, amphibians and fish. The African fin foot is greatly opportunistic and can take the prey straight from the surface of the water. They are skillful and can forage on the river banks as well.
The African finfoot is notably sedentary and nests in lonely territorial pairs and its breeding season is dependent on the water levels available. They build a breeding nest which is flat with loose structure of twigs and reeds that are built 1 – 4m high over water either on flood debris mass or the fallen branches or on a horizontal branch and over hanging tree limb as encountered on Uganda safaris. They lay two (2) eggs which are primarily incubated by the females. The chick leaves the nest just a few days following their hatching.

It can be noted that their elusive behavior make them a great sighting even to an all seasoned ornithologists even those that have always encountered in Lake Mburo National Park on birding safaris to Uganda.
Regarding the conservation and status, it can be noted that the Species status is difficult to determine considering their elusive state. The African finfoot is not regarded as threatened because it is not under persecution or a target to the hunters and despite its scarcity, it is spread widely. But the belief that this Species might become threatened since the wetlands are being cleared and the water courses continue to be polluted. It is also believed that African fin foot can tolerate a minimal disturbance. Apparently, there are no populations of African fin foots in captivity.