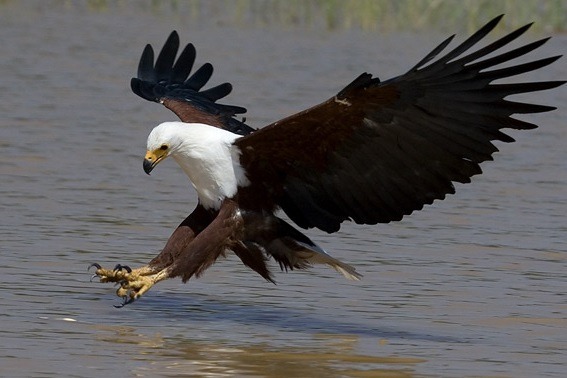 The African Fish eagle also referred to as Haliaeetus vocifer is a large eagle Species that exist in the parts of Sub Saharan Africa where expanse open water masses exist with adequate supply of food including Uganda where it is always explored on birding safaris in Uganda
It is a bird of great political significance and appears as the national bird to the countries of South Sudan, Zambia and Zimbabwe. The African Fish Eagle belongs to the Haliaeetus genus and its closest relative is believed to be the Madagascar fish eagle which is critically endangered. Like most other Sea eagle species pairs, this features white headed Species and tan headed one. They are noted to be ancient sea eagle lineage containing dark talons, eyes and beaks. The two Species feature at least partially white tails including the Juveniles.
Regarding the description, the African Fish Eagle is a large bird where the female weighs in between 3.2-3.6 kg and is notably larger than males which weigh 2-2.5 kg which is a typical sexual dimorphism thriving in the birds of prey. The Male African Fish eagles feature a wingspan of up to 2.4m with a body length of 63 – 75cm. The adult fish eagle is unique in appearance featuring brown body, large black wings that are powerful. The head, tail and breast of the African Fish Eagle are noted to be snowy white with featherless face exception that appears yellow as seen on safari in Uganda. The eyes of African fish eagle are dark brown while the hook-shaped beak appears yellow along with a black tip. The juvenile features a brown plumage along with pale eyes. The feet of African Fish Eagle feature rough soles which are fitted with powerful talons that allow it to grasp the slippery aquatic prey.
Regarding the distribution and habitat, the African Fish Eagle is popularly encountered close to fresh water lakes along with rivers and reservoirs though they can still be found close to the coast, lagoons or mouths of the rivers. Just like the name suggests, the African Fish Eagle are restricted to the Sub Saharan Africa and some of the notable places where it is noted to be resident include; Orange River in Namibia and South Africa, the Okavango Delta in Botswana, Lake Malawi in Malawi, Tanzania and Mozambique, Lake Victoria shared by Uganda, Kenya and Tanzania and a range of rift valley lakes where travelers on Uganda safaris always explore it. The African Fish eagle prefers open water which has adequate prey and perch. They are absent in dry areas.
Regarding breeding, the African Fish eagle breeds in the dry season when the water levels are considerable low and are noted to be monogamous that is mating for life. The pair of African Fish eagle tends to maintain 2 or more nests that they usually re-use. Since these nests are built on continuously, they can grow to gain considerable size reaching up to 2m in width and 2.2m in depth. They are commonly placed in large trees and put together with sticks and other wood pieces. The female African Fish Eagle can lay 1- 3 eggs which are white with minor reddish speckles. The incubation is carried out by the female but the male will take over when the female goes out to hunt and the incubation exercise lasts 42 – 45 days before the chicks are hatched and the parents tend to rear 2 – 3 chicks successfully. These chicks fledge at about 70 – 75 days while the post dependence fledging takes about 3 months.
Regarding diet, the African Fish eagle thrive mainly on fish which it swoops down up from a tree perch snatching the prey from the water using its large clawed talons. It then flies back to the tree to consume its catch. If the fish is too heavy to be lifted up, it drags it to the shore. If it is too heavy that it cannot even allow the fish eagle to do a simple flight, it drops in the water and paddles using its wings to the shores. The African Fish eagle is also known to take the catch of other bird species like the goliath herons and this is called kleptoparasitism. The African Fish eagle can also consume water fowl like ducks, terrapins, small turtles, baby crocodiles, lesser ad greater flamingos, the lizards like Nile monitors, carrion and frogs. The African Fish Eagle at times consumes mammalian prey such as monkeys and tree hyraxes and has also been encountered feeding on domestic chicken.
Regarding Conservation, the African Fish eagle is listed as least Concern by the International Union of Conservation of Nature and its population is given to be around 300,000 birds spread over a geographical coverage of 18,300,000 km2.