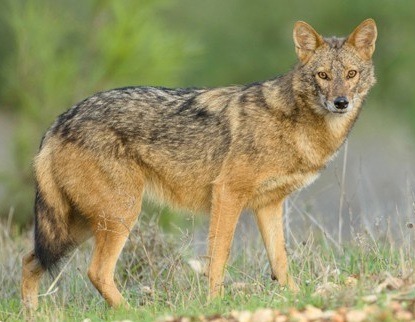 The African Golden Jackals which have been studied of recent and name change proposed to African Golden Wolf due to their closeness to the Wolf other than the jackal is among the impressive Uganda safari products that make the wildlife safaris in Uganda rewarding
However, though these species form an impressive tourist product, it would be better if they remained in the protected areas. They have extended their wrath to the Ibanda Community and have so far brought to death to more than 100 domestic animals along with 2 people.
The personnel from the Uganda Wildlife Authority along with the Uganda Police have been on the search for these golden jackals but in vain. The entire community is increasingly getting concerned and as a result an emergency meeting was conducted at the headquarters of Nsasi Sub County on Friday last week to find a solution to the problem.
The converged members agreed to call for the support of the Uganda Peoples Defense Forces to undertake the jackal hunting. At the time of the meeting, the a range of 10 goats and sheeps had been killed in the morning in the sub counties of Nyamarebe and Nsasi
The Uganda Wildlife Authority Coordinator for the Ibanda sector Diao Ecume notes that jackals are challenging to hunt because they are swift sprinters. These species are actually killing more than what they can consume and like to undertake the hunting at night, early morning and within heavy rain and these are the times that people are always in their homes.
These golden Jackals are speculated to have strayed three weeks back from Lake Mburo, Queen Elizabeth National Parks and Katonga Wildlife Reserve which are among the re-known sites for Uganda Safaris.
The African golden jackal features the general appearance of grey wolf though it has light weight, small size, short legs, elongated torso and a short trail. The body of Male golden jackal measure between 71 – 85cm in length, 44.5 – 50cm in shoulder height and a weight of 6 – 14kg. The golden jackal greatly thrives in humid reeded areas, the flat shrub lands and floodplains.