The buffaloes in mayuge district got extinct – Uganda safaris news 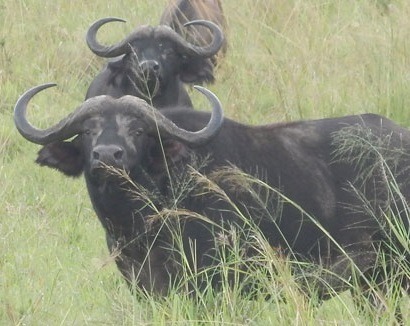 The Buffaloes which are among the Big five of the Land animals which are always sought for by travelers on safaris in Uganda were at one time resident in the Namugongo Peninsula in Mayuge district.
The study which was carried in the area in 2013 indicated that  there was nothing like a sign of buffalo existence. This was a great change as a similar study in 2009 indicated that 59 buffaloes were present and another study carried out in 2012 indicated that there were 18 buffaloes existing in the peninsular which had made it a point of interest for Uganda safari undertakers.
The natural habitat destruction due to un controlled man’s activities and because of this the officials from the Uganda Wildlife Authority are aiming at partnering with Mayuge local government to see how they can ensure the protection of the remaining Species of wildlife spread over 1000 hectares of Namugingo Peninsula which would in turn keep the potential of the area as a good destination for travelers that plan safaris to Uganda.
The Sub County Head Mr. William Atube noted that the extinction of buffaloes in the area roots in the absence of fence which put the wildlife in direct conflict with the humans. The buffaloes would encroach the people’s gardens and the people would hunt them in return.
The Uganda Wildlife Authority ,the public body responsible for management of wildlife in protected areas and outside protected areas was supposed to track the buffaloes in 2009 after an Ariel survey that was carried out but everything remained a mystery noted the Mayunge District Natural Resources Officer Musa Lubanga. He continued to more that despite the fact the buffaloes do no longer exist, the locals still live in far. Musa speculates that the buffaloes might have migrated to the Lake Victoria’s Buvuma Islands which seem to be more habitable than the former.
Buffaloes can be encountered in other National Parks of Murchison, Kidepo, Queen Elizabeth, Lake Mburo and a range of other sites by travellers on Uganda safari tours.