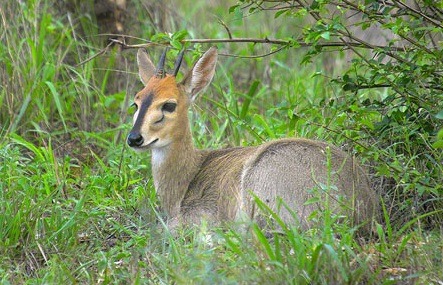 The duiker is notably a small to medium size antelope that is indigenous to Africa’s Sub Sahara including Uganda where they are always explored on Uganda safaris. Belonging to the Cephalophinae Subfamily and Cephalophus Genus; the duikers are separated from the bush and forest duikers where the forest duikers thrive in the Sub Saharan rain forests while the only savannah duiker named common duiker thrives in the savannah.
The duikers are notably shy and elusive species that prefer to dwell in dense forest cover and for those that thrive in open areas always jump to the thicket for protection as always encountered on safari in Uganda. As a result of their scarce and scattered population, little is known about the duiker Species and the generalizations are majorly based on the generally studied red forest, the yellow-backed, blue and the grey duiker.
The Duikers range from 3kg for the case of blue duiker – 70kg for the yellow backed duiker. The duikers feature close to the ground body along with short horns. The Forest duikers – one of the common Uganda safari products has the capacity to navigate through the thick forests and easily dive into bushes while threatened. The grey duiker which is common in open areas including savannah features long legs, vertical horns that gives them the capacity to run faster for considerable distances. The horns are possessed by the males that are notably confrontational and territorial. The duikers feature fully grown preorbital glands that looks like slits under their eyes or the pedal glands in the hooves among the blue duikers which the males utilize to the territory marking.
Apart from reproduction, the duikers are greatly independent and like to thrive alone. This partly explains the limited sexual size dimorphism exhibited in a range of duiker species except the grey duiker where the females are considerably larger than the male duikers.
The duikers hide from the predators as the primary mechanism for defense taking advantage of their reserved nature and size. They first freeze at the initial threat sign and then dive to the closest bush. However, this differs to when they are marking the territories and fighting over females as they are more aggressive.
The duikers tend to thrive alone or in pairs minimizing competition that would occur while thriving in groups. The duikers are selective feeders as they consume particular plant parts. They are majorly browsers other than grazers and consume leaves, seeds, shoots, buds and fruit along with the bark. They are noted to follow the bird flocks or the monkey troops taking advantage of the fruits that these two drop. The duikers supplement the above with carrion, insects and at times capture small birds or rodents.
Food distribution contributed a lot to the distribution of the duikers as well. The duikers tend to like feeding on specific plant parts which are nutritious. They also derive most of the water from the fruits that they consume and thus they can thrive on waterless localities. The duikers are noted to be diurnal or nocturnal and can be both.
Regarding distribution, the duikers thrive in the tropical forests of Africa and the issues of habitat loss along with over exploitation are threatening the duiker continuity. The duikers are always targeted as a source of bush meat and even poached in protected areas including Bwindi Impenetrable National Park where the snares targeting the duikers have at times captured the mountain gorillas one of the main tourist products explored on Uganda tour.