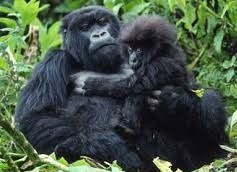 These precious apes that are always encountered on gorilla safaris in Uganda comprise the eponymous genus Gorilla, the large sized primate genus in terms of physical expression. Gorillas are predominantly land dwelling animals which largely forage on vegetation and no wonder they inhabit the forest tracts of Bwindi and the Virunga Volcanoes – the world’s re-known gorilla trekking destinations. Belonging to the Subspecies; Gorilla. beringei beringei, Species; Gorilla beringei, Genus; Gorilla, Family; Hominidae, Order; Primates, Class; Mammalia, Phylum; Chordata, Kingdom; Animalia, Mountain gorillas – the current prime Uganda safari products are posterities of ancestral monkeys and apes that dwelled in the vast lands of Africa and Arabia at the onset of the Oligocene epoch approximately 34 – 24 million years ago. The fossil evidence to support the existence of hominoid apes in East Africa date back to over 18 – 22 million years ago which shows that the flourishing of gorilla safaris in Uganda and Rwanda is by no means a surprise venture.

The Mountain gorillas and other gorillas in general share the same ancestor with humans and Chimpanzees – commonly encountered on chimpanzee trekking safaris in Uganda of which it is noted that these three groups separated from their common ancestor about 9 million years ago. It is this separation that led to the emergence of genus gorilla and though its early relative is not well known, theories say that proconsul africanus – the earliest ape could be the one.