The gorillas of Uganda; beyond the wild animals – Uganda gorilla safari news

Home » The gorillas of Uganda; beyond the wild animals – Uganda gorilla safari news 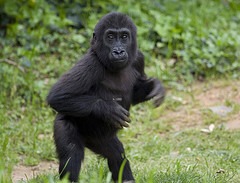 Uganda seated in the east of Africa is one of the three countries in the world that are gifted to have populations of the critically endangered mountain gorillas. In fact, Uganda has close to a half of these species populations with one of her protected areas Bwindi Impenetrable National Park housing 400 out of the 880 mountain gorillas – something that has laid a rich ground for gorilla trekking safaris in Uganda.
But, one may wonder why all that attention to the wild animals. The truth is that mountain gorillas are beyond the wild animals when it comes to those who have discovered a fortune in them. To some, mountain gorillas are impressive creatures and our close relatives thus should be treated as brothers and sisters and to others, they are their source of livelihood to them, communities around and the country at large. Through gorilla safaris in Uganda, Mountain gorillas have contributed greatly to the national revenue and the lives of the local people that surround their habitats.
Each gorilla permit in Uganda costs $600 and with a total of 13 habituated gorilla families in Bwindi and Mgahinga, the income generations are enormous assuming the permits are fully bought. The people employed in the gorilla tourism scheme that people have called gorilla payroll. Talk of tour and travel companies and their staff, the Uganda Wildlife Authority staff including the park wardens and rangers, the local porters and guides not forgetting the safari lodges where travelers on a gorilla safari in Uganda and their workers combine to praise the name of the mountain gorilla holding it a position that is beyond any other wild animal.
The record keeping and considerable attention accorded to these species, one may regard them to be above the ordinary Ugandan. Look at the Batwa people and their eviction from the gorilla forests and the life that followed. These were ancient homes but government had to take the priority whether to keep the people in the forest or to pave way for mountain gorilla conservation. It was not government alone; the international conservation bodies also had a hand in it. At last, the Batwa were evicted and mountain gorillas were left to live freely in the forest. This was partly motivated by the desire to conserve these precious species for the benefit of generations to come and those that would with to gorilla safaris to Uganda. With this sequence of events, one is free to argue that mountain gorillas of Uganda are beyond the wild animals.
Uganda gorilla safaris/Uganda gorilla safari News
Prime Uganda safaris & Tours Ltd