The guinea fowl; birds of Uganda 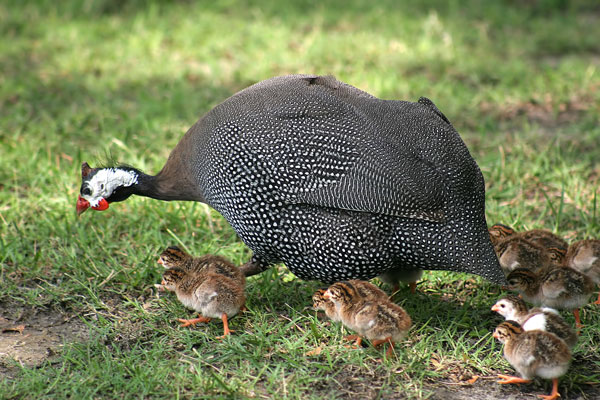 The Guinea fowl also referred to as the original fowl and always encountered on safaris in Uganda is a family of birds that belong to the Order Galliformes though some groups such as the American Ornithologists’ Union categorize them as a sub family Numidinae belonging to the Phasianidae family.
It can be noted that guinea fowl thrives on the tropics of Africa including Uganda where they are seen on Uganda safaris though with time; the helmeted guinea fowl have been introduced to other parts of the world. The Guinea fowls are noted to be ground nesting, seed and insect eating that look like partridges though with feather less heads regardless of belonging to the Guttera genus together feature a varied black crest while the vulturine guinea fowl features a downy brown patch on the nape.
A considerable number of the guinea fowl species feature dark grey or the blackish plumage which has dense white spots however, the members of Agelastes genus do not have the spots Though, a range of species are considerably recognized, the plumed guinea fowl and other two (2) members of Agelastes genus remain averagely less known. It can be noted that large guinea fowl stretches up from 40–71 cm long and carry a weight of 700 – 1600grams
Regarding the ecology and behavior, the guinea fowl is known to be monogamous and thus mate for life though the helmeted guinea fowl has been noted to be exceptional. It can be further noted that guinea fowls are social birds that thrive in groups though in small numbers as can be explored on safari in Uganda. About the distribution, the guinea fowls are spread to the various parts of Sub Saharan Africa though some are localized like the plumed guinea fowl which is spread in the sections west and central Africa along with the vulturine guinea fowl spread in the north east Africa. The guinea fowls tend to inhabit the savannah or semi desert lands though the black guinea fowl which mostly inhabit forested lands.
The trans-location of guinea fowl has been recorded with the helmeted guinea fowl seeing its introduction to East Africa, the United States, the West Indies, India and Britain where it kept for pet and food purposes. Guinea Fowl is consumed in greater sections of Africa but most especially Botswana and Nigeria, in the outside lands of North America especially the Georgia state and then India. The guinea fowl is such precious dish that in Belgium and the United Kingdom has to feature on a Christmas menu. It can be noted that the meat of Guinea fowl is relatively dry and lean than that of chicken or the Turkey and contain the gamey flavor. Its meat feature more protein more than turkey and chicken while its eggs are richer than those of chicken.