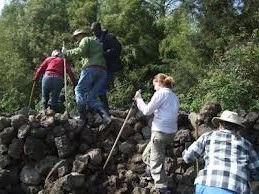 This is a common question which is asked about gorilla tracking in Rwanda.it has also always been the most difficult question to answer. Always trekking in Volcanoes national park provides good experience to the tourists who visit Rwanda; the guides have had to carry tourists down). On the other hand, if everything fails your favor, the excursion will be little more demanding than the proverbial stroll in the park.

The trek to see the mountain gorillas in Rwanda has got two distinct phases, one which is to hike from the closest car park to the forest and the national park boundary, and this one usually takes 30-60 minutes depending on the speed of the trackers, the second trek in to the forest in search for the gorillas and this one usually have been located by the advance trackers by the time you reach the forest edge. This trekking of mountain gorillas in the forest is liked by most tourists who visit Rwanda.

Always the first part of the trek is predictable, and it’s usually quite flat and not so demanding unless the mountain trekkers are going to visit the Susa group, which involves a longer and steeper ascent. However, the second part of gorilla tracking is difficult to predict, as it always depends on the exact location of the gorillas on a specific day and also on the steepness of the terrain. More factors which determine the difficulty of mountain gorilla safaris include; the density of the vegetation and the weather in the park.

The hike to the Susa Group has been considered to be most demanding but also most rewarding with more than 40 mountain gorillas to view. The sabinyo group is the most reliably straightforward to reach in the park, the hikes to Kwitonda, Hirwa and group 13 are not so demanding whereas the hike to Amahoro Umubano group tend to be more difficult but not as hard as that of Susa group. Despite of all the difficulty these groups bring about while gorilla trekking, they have continued to attract visitors to Rwanda.