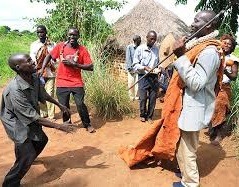 The Ik is an ethnic group in Africa that is at serious risk of extinction and the rare ethnic group is anticipated to have come from the famous Nile delta region during the early downfall of great Egyptian empire. In the present day Uganda, Ik tribe form around 11.217 people who are steal supported in the country’s Karamoja region where the Kalimajong people one of the interesting tribes attracting many safaris to Uganda due to it is unique and unexplored culture.
The endangered Ik people who are represented in the Northern region of Uganda- the region rarely explored by tourists while on their Uganda safaris are considered to be substance farmers whose local language is described to be highly different from the Kuliak sub-group of Nilo-Saharan languages. The best way one can explore and learn some few words of these people is by under taking safaris to Uganda’s northern region especially the Karamoja region.
The interesting tribe of IK which deserves visit while on your Uganda safari tours, used to be cattle keepers and after constant raids by their Karamojonges neighbors, Ik decided to stop the idea of keeping or rearing cattle in order to avoid conflicts.
The Ik people stay in some twenty small villages along the escarpment between Timu forest in the north and Kidepo valley national park-the only beautiful national park rewarding travelers who  undertake Uganda safari tour to northern region with the views of different wildlife species and unique scenic views. Surrounded by outer walls, Ik are partitioned into small families dubbed “neighborhoods”. Before the land used by the Ik was announced national park, the Ik people mainly used to depend on hunting as well as gathering the fruits. Booking Uganda safari tour destination of Kidepo National Park will allow you to explore the unique culture of the Ik people.
Ik are said to have been the first people to migrate to the north eastern part of Uganda and they say that the word Ik means “the first one to migrate”. During their early times of settlement in the northern region, Ik culture used to expel their children out of the households at the age of three. This was done so that the children could also survive on their own by getting basic needs like food. This was done due to the long drought seasons that could affect the region.
The cultural heritage of the Ik people is very rich and waiting to be explored by any traveler spending his or her safaris and tours in Uganda. Spending a day with the Ik people together with its splendid scenery of Morungole Mountain located in Kaabong district is very amazing.
What is more surprising with this particular tribe is that ,they pay between 5 – 10 bee hives as bride price instead of commonly used cattle in Uganda. This particular tribe possesses other unique cultural habits like marriage which are very pleasant to any visitor on safari tour to Uganda. The number of beehives being the determinant, a man can marry as many wives as he wants
Hiking up to the Ik villages can be one of the rare opportunities and experiences that are worth experiencing while on your Uganda tours and safaris .Taking guided within the Ik villages, will enable you to encounter and ask these local people questions about their ancient lifestyle, how they up bring their children, nature of leadership in the community among others.
Uganda Safaris/Uganda Safari News
Prime Uganda Safaris and Tours Ltd