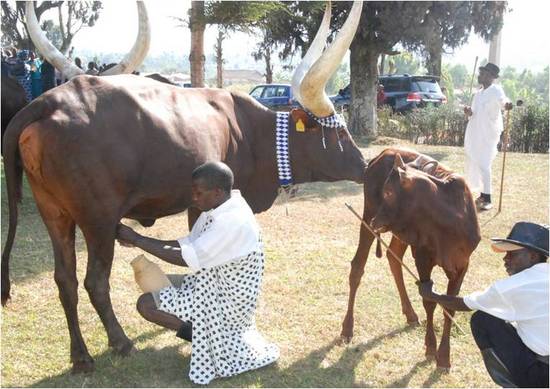 The traditional Inyambo cows are one of the remaining creatures that live to testify the beauty of Rwandan traditional society which is always fancied by travellers undertaking safaris in Rwanda.
One could be hearing about cows or has ever seen them but the Inyambo cows in the Nyanza King’s palace pose a great distinction from other species. Physically, noticeable by their long horns with different patterns, their cultural and historical significance qualifies them to be included on the must see list while planning your safari to Rwanda.
The Inyambo cows served a central role in the traditional Rwandan Monarchy particularly in honor of the ruling King. The breeding of the Inyambo cows was unique because of their destined life mission. The Inyambo cows were taken through some traditional practices like submitting them to amazi ahiye – a salt like beverage which ensured that they produce similar calves. The one year old calves were sent for training in the King’s palace by a competent cattle keeper. Inclusive of the training package was listening to the songs of the trainer like amazina y’inka and amahamba not forgetting following his movements. The Inyambo cows would do a stately parade on royal functions and would be decorated in expensive jewellery. This decoration can still be seen today on Rwanda safaris.
Apparently, this traditional exercise is exercised by Rwanda Agriculture Board and from 2008 about 30 Inyambo cows have been sent to the Kings palace in Nyanza which serves as a cradle land of Rwandan traditions. The cows are trained of the similar traditional aspects and thus can parade for those on Safaris in Rwanda though at a fee of Rwf 100,000 and Rwf 200,000 in case of filming. With the introduction of the Inyambo cows in the Kings palace Museum, the visitor arrivals have gradually increased to 32,012 Rwanda safari undertakers. The Inyambo cows fascinate the visitors mostly because of their longhorns and elegance.