The karisoke research center in Rwanda 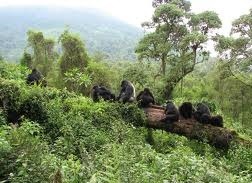 The historical Dian Fossey established the famous Karisoke Research Center on 24th Sept 1967 in the Rwanda gorilla safari destination of Volcanoes National Park in between the mountains Bisoke and Karisimbi whose combination formed the background for its naming.
Karisoke had a humble beginning justified by Dian Fossey’s writings in her book titled the Gorillas in the Mist; she notes that little did she know that by establishing two small tents in the Virunga wilderness was a great foundation for what increased to become a great research center worldwide and utilized by the students and researchers from various parts of the world.
The initial focus of the Dian Fossey and her research center at Karisoke was about studying mountain gorillas. She is credited for having pioneered the habituation of mountain gorillas, gorilla identification, gorilla tracking that later resulted into gorilla trekking safaris in Rwanda, gorilla range mapping along with the primate research techniques that have become of use in the contemporary times. Dian Fossey in her process of studying mountain gorillas ascertained that there was a need to ensure the mountain gorilla protection since threats like poachers snares, the habitat encroachment by humans, cattle grazing among others could not allow the gorillas to continue thriving.
Dian Fossey is credited for having initiated the practices of active conservation like the armed anti-poaching patrols and when her favorite Silverback Digit was killed by the poachers, she set up the Digit Fund to run the active gorilla conservation. Following her death, the name of Digit Fund was reviewed to Dian Fossey Gorilla Fund International that still runs Karisoke up to today.
The Dian Fossey is noted to have lived in tents for a period of one year and a half until she accepted the European friends that thrived in the nearby towns to put up for her one room cabin and in the next ten (10) years, a count of eight (8) were put up at Karisoke.
Despite the efforts, the mountain gorilla populations continued to reduce up to  1980s when the population trend started to increase up to the current 480 mountain gorillas in the Virunga massif sheltered by Volcanoes National Park on the Rwandan side presenting a ground for Rwanda gorilla safaris.
There are a range of events that happened at Karisoke in the process of working towards mountain gorilla conservation including the initiation of anti-poaching patrols per week in 1978, inviting Dr. Leakey to send her students for assistance in 1969 which in turn formed a ground for students from various parts of the world to come and explore the experience of the field and the opportunities for research, Bob Campbell of National Geographic visited in 1969 covering the Dian Fossey work while on 31st Dec 1977, the silverback Digit was killed by poachers and removed hands and head from him and announcement was read on the Evening news of CBS by Walter Cronkite. In the year 1983, the book Gorillas in the Mist was published and it gained as the international best seller and a film from this book was made by Sigourney Weaver gained great success in the year 1988 that saw its initiator head the Dian Fossey Gorilla International Fund until now.
The decade of 1990s was challenging to the Karisoke research station as the genocide and the civil war caused the evacuation of staff a number of times. The Karisoke buildings faced destruction and loot. The trackers at Karisoke lost their possessions and homes and range of their family members were murdered. By the year 1998, the expatriate staff at Karisoke had been evacuated for five (5) times and the center had been destroyed 3 times and reconstructed twice after which it was relocated to Ruhengeri. However, despite the war threats, the Karisoke Research station continued to strengthen her capacity for research via adopting modern technology and creating new partnerships along with the local authorities and other conservation organizations. The Rwandan staff belonging to Karisoke continued to undertake a close look at the gorillas throughout the eight (8) years though they had a 15 month disruption. The Rwanda Patriotic Front took the records at Karisoke in the year 1993 but returned them intact later at a safer time.
Karisoke research station secured a GPS in the year 1993 to assist in tracking the movements of gorilla groups and map creation. Karisoke initiated health programmes to support the life quality of local communities and in the year 1999, the Karisoke started to use the hyper spectral remote sensing imagery undertake the mapping of the gorilla habitat of Rwanda.

The publication named the 30 Years of Research at Karisoke resulting from the conference that was organized by Max Planck Institute for Evolutionary Anthropology featured a range of chapters contributed by the staff of Dian Fossey fund.
The Karisoke research station went ahead to habituate golden monkeys at the request of the Park Authorities of Rwanda for study and Rwanda safaris. The Karisoke Center has also been working with the University of Rwanda to provide field research opportunities for the biology students. The mountain gorilla Veterinary Project that caters for the gorillas that have been confiscated was set up by Karisoke in collaboration with the Park Authorities of Rwanda in 2002. In the year 2012, the Karosoke research Center was got the first Rwandan director named Felix Ndagijimana and in the same year, the center was shifted to a multi-purpose building in the Musaze town which is also the new regional resource center of the Dian Fossey Gorilla Fund.
The works at Karisoke Research Center cannot escape credit in anyway as they have turned the fate of mountain gorillas from the negative trend to the positive trend. The census which was carried out in 2003 put the gorillas in Virunga massif at 380 individuals while the subsequent one of 2010 put the gorilla population at 480 individuals. These numbers have considerably increased gorillas safaris to Rwanda.