The kisizi falls; the site of ancient horror

Home » The kisizi falls; the site of ancient horror 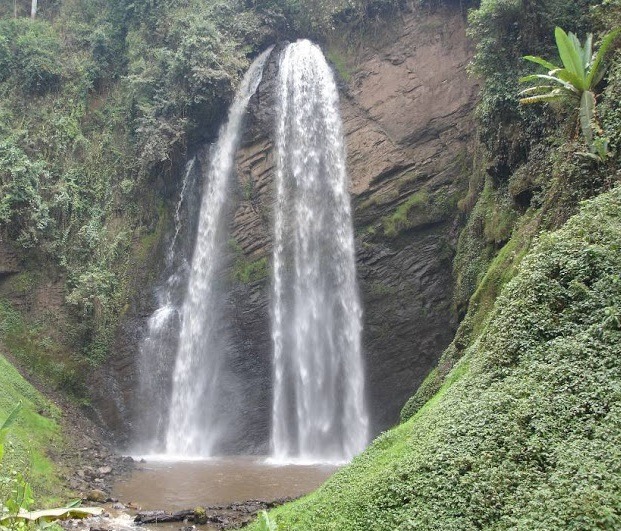 Located in the district of Rukungiri in the south west of Uganda about 22km to the south of Rukungiri district headquarters, Kisizi falls is a remarkable beautiful site that counts on the list of Uganda safari attractions not only because of its beauty but also its history
At 46km north of Kabale which is the largest town in the Sub region standing at the geographical coordinates of 00 59 45S, 29 57 44E, the impressive Kisizi falls is positioned on River Rushoma that flows south west along the extended valley arising from the Muhanga area before falling for 30m below and then continuing to the north east emptying into Lake Edward another unique features always visited by travelers on safaris in Uganda.
The greatness of the Kisizi falls goes beyond the beauty. It can be noted that traditionally, Kisiizi falls was a tragic place in the ancient Kigezi area where the girls that would get pregnant before the marriage would be thrown down the rock just like the waters and succumb to death. This was done because premarital pregnancies among the Bakiga like in most of the traditional African societies were totally prohibited.
It is a rewarding moment to encounter such strong wind ruffling through tall trees as the water bowls hit and then bounce off the rocks producing a hushed monotony while a range of bird Species jump in the fresh air and in their nests making such melodious sweet sounds. The site enjoys humid climate. This makes it a remarkable site that local people would take pride in right from the beginning to have in their land.
However, the traditional girls never enjoyed this beauty. Locally known as Aheibanga or the cliff in English, the paternal relatives would bring a pre-marital pregnant girl to the ravine led by the father and the brother and violently throw her down the cliff. This was the local way of judging the shame, embarrassment and the dishonor that the offender had caused to the family, the tribe and  the general community.
These tales are supported by the still existing elderly local people who witnessed some of the incidents. The most tragic one occurred when a girl who was to be thrown down the ravine pulled her father and the brother down and they all died together and there are claims that the voices of the deceased trio at times are heard calling one another. It can be noted that Kigezi has other sites of similar stature including the Akampene Island also known as Punishment Island on Lake Bunyonyi where the premarital pregnant girls would be dropped and abandoned to die of starvation, extreme coldness and wild animals.
The fate of Kisizi falls was to change in the 1950s when the thread manufacturing flux factory was constructed in the area. After its collapse, Dr. John Sharpe who had grown uncomfortable of the treatable diseases that had terrorized the community requested the facilities to be used as hospital through the Church of Uganda.
The flux factory had built the power dam and with the hospital opening up in the year 1958, Kisizi could no longer be viewed as a place for hanging the wrongful girls but was seen as a healing center. However, the natural attractiveness of the site and its history has made it popular tourist attraction in the area thus at times included on the list of what to encounter by those planning safaris to Uganda
The Kisizi site also features accommodation establishment to facilitate those that would wish to spend an overnight in the area and the visiting clientele include the nationals and foreigners.