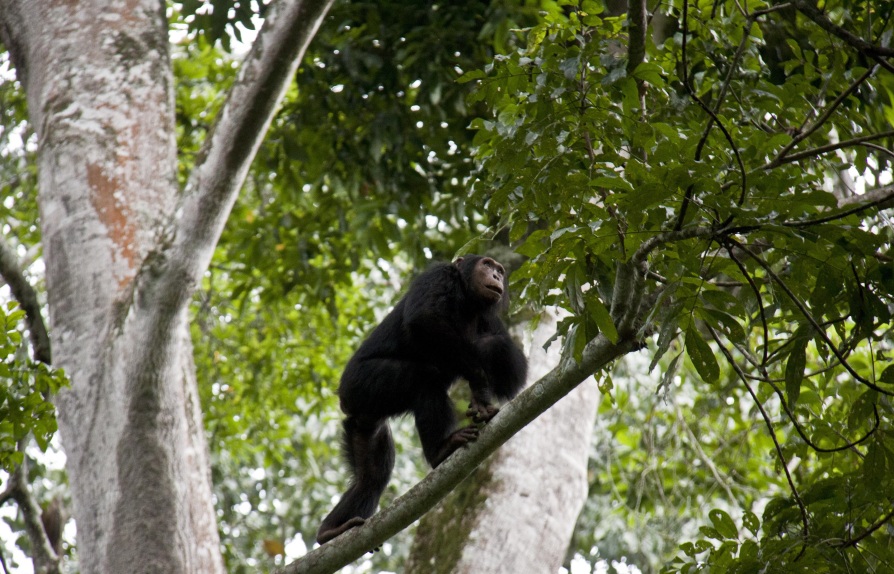 The Kyambura Gorge in the Queen Elizabeth National Park is among the range of destinations where Chimpanzee safaris in Uganda are conducted.
Also known as the Valley of Apes, the Kyambura gorge is counted among the most popular spots in Queen Elizabeth National Park frequented by travelers that come on Uganda tours. The gorge is a rich habitat to a range of wildlife and amazingly the only population of Chimpanzees in the park.
Appearing at 100m deep from the low lying flat savannah landscape, the lush tropical forested gorge features a considerable concentration of primates and most especially the Common Chimpanzees. The gorge presents a different life from the immediate adjacent eco system. At times, travelers on Uganda Safaris wonder the Godly creation of the Albertine rift landscape; how a flat savannah stretch filled with counts of grazers in open grassland is suddenly intercepted by a deep gorge with a lush tropical forest that amazingly thrives below the sea level supporting the fruit and other foliage eating Chimpanzees.
The bed of the gorge is traversed by the River which donates the name to the gorge and the adjacent area. A local legend has it that the river flooded taking the local people by surprise and took away their clothes. Following the subsiding of water, the local people followed the river course up to Lake George with hopes of tracing their possessions that the floods had taken. Unfortunately, they could not locate any and would come back home lamenting Kyambura which literally translates to “I have not seen it” and the locals finally called the river Kyambura.
The Uganda Wildlife Authority undertook the habituation of the chimpanzee habituation in Kyambura gorge and the chimpanzee trekking encounter goes for $50 for each person but putting in mind that Kyambura still offers a 50 – 50 chances of exploring these apes. At times, the gorge might reward you with impressive hikes through its magical slopes and the lush tropical flora plus the views of the River below and keep the chimp experience for another day. But when the chimps are encountered, it is an encounter of a lifetime. They roll themselves on the trees, the get down to offer you a courteous welcome which may be short lived and you begin following them as they play, interact with one another and make crazy calls that researches have branded as pant hooting among other interesting aspects that make your encounter with them on tour in Uganda magical.
As a result of the terrain nature, trekking chimpanzees in Kyambura gorge would be more ideal for those that are still physically fit. The combination of chimpanzee viewing experience, the forest cover, the challenging slopes and the River flowing below have at times lured the travelers top rank it number one destination for tracking Chimpanzees in Uganda. In addition, the gorge features other wild game including the black-and-white colobus, red-tailed monkey, vervet monkeys and baboons. The bird species like the falcons along with the blue-headed bee-eater among others also exist.
The Kyambura gorge marks the boundary between the Kyambura Wildlife Reserve and Queen Elizabeth National Park and lies in the eastern section of the park.