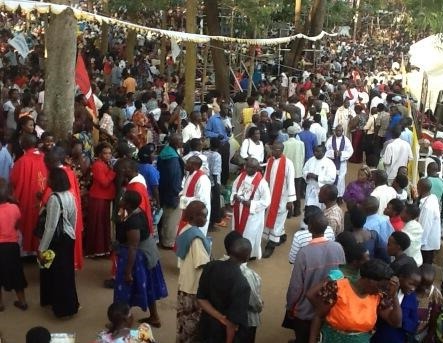 Uganda is worldly re-known for being a home of the Uganda Martyrs that were executed by the then King of Buganda Kabaka Mwanga for converting from the traditional religious practices To Christianity after the arrival of European missionaries. The converts were put to execution at Namugongo under the command ship of the chief executioner Mukajanga and the order of the King making Namugongo a great site of significance in the Christian faith prompting a range of believers local and international to plan safaris to Uganda to step at this holy ground
The Uganda Martyrs were accorded on the 3rd June every year as their commemoration day following their declaration as saints by the pope in 1964 October 18th. The day pulls a range of believers from different part of the country and beyond borders to come and participate in the pilgrimage. Travelers on safari in Uganda also take time to have an encounter at the site.
The Tourism promotional bodies in the country have come up to tap the potential of this date to boost the country’s tourism and with partnership and support of various tourism boards in the region, the event has gained great visibility and market in the their respective countries prompting them to do Uganda safaris to pay attribute to these remarkable martyrs.
The coming 3rd June has already gained momentum and a range of pilgrims from all over the country have already embarked on their long marches to Namugongo. Apparently the notable ones are over 300 pilgrims that are on the move to cover 335 km to Kampala. Others are coming from other parts of the country. These pilgrims are committed Christians and they walk to seek the blessings of the divine saints intervention in their lives and the world. These long marches surprise the tourists on Uganda safaris and tours when they meet them along the routes to other tourist sites.
Uganda safaris/Uganda safari News
Prime Uganda safaris & Tours Ltd