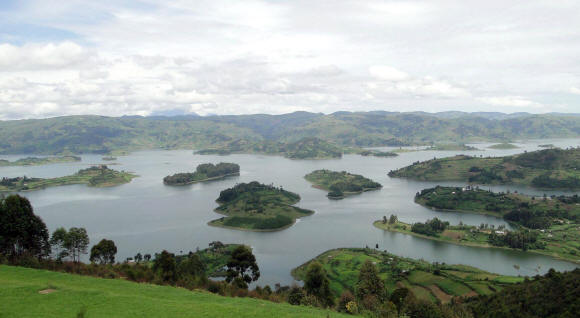 Popularly known as the lake of a thousand Islands, Lake Bunyonyi is one of the fascinating Uganda Safari tour destinations in the Kigezi region.

At about 25km from the northern border of Rwanda and 52km from the closest Bwindi Impenetrable Park region of Ruhija where gorilla safaris in Uganda are carried out, Lake Bunyonyi occupies a flooded valley system amidst the steep rugged hillsides of Kigezi Highlands and its range of 29 Islands make it one the most fascinating water bodies in Uganda.

Believed to have come into existence about 8000 years past from the overflow of the Virunga volcanoes, Lake Bunyonyi features a heritage of beauty and culture as the communities that have lived around its shores and some of its Islands have got a lot of tales about it. The lava from the adjacent Volcanoes blocked River Ndego at Muko leading to the formation of a dam. The Virunga Volcanoes stand as a chain of eight (8) Mountains straddling across Uganda, Rwanda and Congo and are among the most exciting physical features to explore on Uganda Safaris and tours.

Lake Bunyonyi stands as the Africa’s second deepest lake and the deepest in Uganda extending to incorporate the surrounding marshes and Ruvuma swamp which is a rich haven for birders. The main Islands of Lake Bunyonyi have rich history behind them including the Punishment Island where the pregnant girls would be left to die as it was abominable to get pregnant before marriage among the Bakiga. The Njuyera or Sharps Island is known as a historical leprosy treatment while Bucuranuka (Upside Down Island) is noted to have buried people alive when they refused to offer local brew to a passing old woman. Such exciting history makes the lake a rich destination for cultural tours in Uganda. The Batwa people a former hunter gather group that lived in the forests were resettled on one of the Islands of Lake Bunyonyi and have got a great heritage to explore as well.

The other lake adventures including the canoe paddle, engine boat ride, swimming, biking along the lake shores, nature and birding walks around the lake and its Islands combine to derive lasting experience.

Accommodation is available in various lodge categories including Luxury, Midrange and Budget including