The mapping of historical sites and buildings in Kampala completed

Home » The mapping of historical sites and buildings in Kampala completed 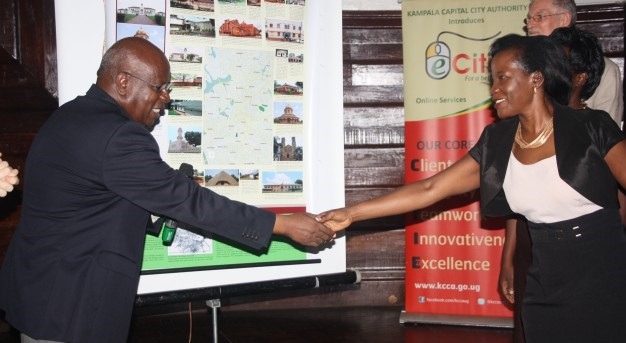 The map with pictures of Fifty one (51) historical buildings along with sites that were sieved out of the 100 historical sites and buildings was completed and launched in a strategic move to facilitate the development of Uganda safari tours in Kampala city.
The historical buildings featured include Bulange which is the Parliament of the ancient Kingdom of Buganda, Twekobe which is the King of Buganda’s palace and the Churches like Rubaga and Namirembe Cathedrals. These buildings and sites are re-known custodians of history and culture which has at times prompted world travelers to plan safaris to Uganda thus worthy of preservation.
The Map was of recent launched in Kampala and was an idea of the Cross-Cultural Foundation of Uganda implemented in conjunction with the Kampala Capital City Authority, Uganda Tourism Board, Uganda museum along with the Buganda Heritage and Tourism Board the bodies responsible for management, preservation, promotion and sustainable utilization of the identified sites also explored on safaris in Uganda.
The other buildings of great history featured on the map include the Main Building of Makerere University, the Uganda Parliament, Baha’i Temple, Railway Station, Kampala Mayor’s Parlor, Old Kampala Police Station, Hindu Temple, Old Mulago Hospital, the National Theatre, Currency Building of the Bank of Uganda, Mengo Primary School, Treasury Building and Uganda Bookshop among others.
Besides the historical building, the map feature a range of historical sites including Kasubi Tombs, the Kabaka Njagala Road, the Kabaka’s Lake, Amin Dungeon in Mengo and the Independence Monument which are also re-known Uganda Safari products.
According to the Cross Cultural Foundation of Uganda Executive Director Emily Drani, this map took a count of two (2) years to compile following a complex and systematic process. The selection process featured sites and buildings constructed in the year 1969 and below, the cultural importance attached to them, their openness to the owners and the public, their ownership whether private or government and the no restructuring or demolition plans.
The project was conducted with the financial assistance from Bread for the World and Irish government along with three (3) young men which include the Zaake de Conninck and Kintu de Conninck. The value held in these heritage sites is really significant for the national development as they help to connect the past, present and the future. Therefore the map is expected to draw consensus that will work towards continued existence of Kampala and the national heritage which will in turn ensure the continuity of cultural safaris in Uganda
The map was launched by the Chairman of the Uganda Tourism Board Mr. Tumusiime James who also reiterated the significance of cultural tourism world over and its continued rise and greater financial generation than the traditional nature tourism.
Donald Cronin the Irish Ambassador to Uganda who was part of the launch noted that these buildings and sites possess a considerable meaning whereby destroying them risks culture continuity. The travelers including those on safari in Uganda prefer learning about the people, their culture, history and many more. The Ambassador dared Uganda to boost her tourism to generate a lot of finances like Ireland that hosts over seven (7) million travelers per year which are surprisingly greater than her population of five (5) millions.