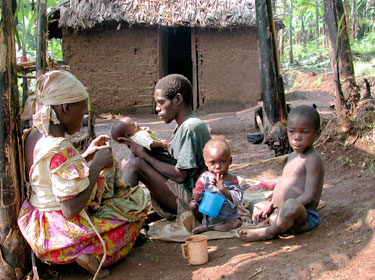 people with so many names, a people with incredibly interesting traditions and arts, a walk among the Batwa/Abathwa/Batwa/Twa people of southwestern Uganda unveils a lot about how diversely minded the creator of the universe is. From riddles, stories, to exhibitions, the Batwa provide the full unique cultural package.
Today on a Safari to Uganda, you will find them living outside Bwindi Impenetrable Forest which their god Nagasian put them in charge of. According to the Batwa, Nagasian saw them as the rightful warriors to protect the forest’s resources including the plants, animals, and streams from any trespassers who intended to cause harm to them.
In return for their services they were allowed to gather fruits in the forest, to hunt small mammal species for food and also to get medicinal herbs from the forest to treat their illnesses. For millennia, the Batwa harmoniously coexisted with the animals in the forest including today’s critically endangered mountain gorillas which many tourists on Gorilla tracking Safaris in Uganda frequently visit. Sending them out of the park implied a loss of the caves which they called home, a loss of sources of food and water.
Over the years, because of their sorry state, they have been associated with titles such as marginalized, rejected, voiceless, endangered and disregarded hence attracting the attention of international organizations like Save the Children Fund, the Batwa Development Program (BDP) World Vision and the European Union (EU). These have toiled to avail the Batwa with basic social amenities like food, water, medication and clothing. Such initiatives have encouraged the Batwa community to live-on, and their current settlements have been transformed into a destination for Uganda Safaris.
The Batwa not only have a sad story, but they still amaze their visitors about the love they have for their culture; a culture they are not willing to give up no matter the pressure. You could basically just sit down and watch how they do their everyday duties and one thing you might want to wait for is their singing and dancing.

These short-structured people now depend majorly on handouts from tourists and well-wishers. A few others have been seen to collect firewood for sale, making and selling crafts, while others have offered to provide services as casual laborers to earn some money to buy necessities for their families. Some of the few developed Batwa have been employed to guide tourists through the forest to areas like caves in which they used to stay and also hunt in.
Although they wear happy faces, the Batwa would still use an extra hand of help. Surviving these people would imply availing them even for future Safaris in Uganda. Our concerted effort should be to ensure that the Batwa pass on their traditions to the next generations. Their culture is surely one we are not ready to lose, but can jointly protect!
Uganda safaris/Uganda safari News
Prime Uganda safaris & Tours Ltd