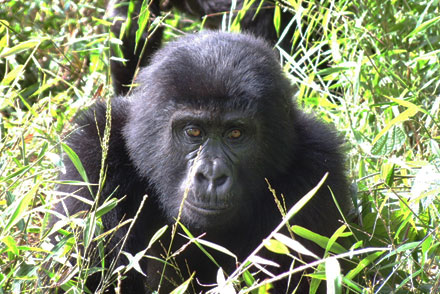 Mountain gorillas are the largest primates found in Rwanda, Uganda and Democratic Republic of Congo. The primates are among the most endangered species out listed by IUCN. They contain 95 to 98% of the Human DNA thus one of the closest relative of man and chimps and therefore an important attraction to see in your safari  to Uganda

They live in thick forested areas of the Tropical Rainforest of East Africa and feeds on leaves, pith, fruits and shoots making them to rarely drink water. The mountain gorillas stay in groups led by silver back who with his live defends the group.

Their activities are divided and coordinated. Their morning time is mainly looking for food while they spend their mid-day for relaxation. . Resting is very essential for the mountain gorillas as it helps them to reinforce and establish a good relation amongst them. Viewing gorillas is best in the morning when they are still looking for food.

The gorillas are very aggressive animals. When two silverbacks meets, they will fight to near death But aggression within a group is minimal. They are also very fearful when it comes to crocodiles, chameleons, caterpillars and other reptiles.

Tracking these primates can be down in Bwindi national park and Volcanoes National Park. Gorilla tracking Safaris offers tourists the finest experiences since tourists will be in position to also engage in other activities like birding, tracking down other primates among others.

Safaris in Uganda offer an opportunity of tracking the gorillas in two national Parks and also the advantage to track the chimps and the golden monkeys.