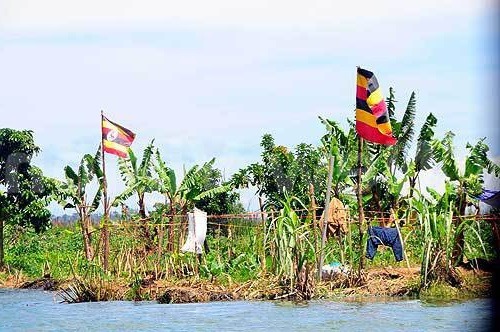 The wonders never end as long as the world and its beings still exist. The destination Uganda which is always visited by world travelers on safaris in Uganda of recent added another addition on its list of the great natural wonders.
The floating Island which has been curved from the mainland between Namuwongo and Ggaba first settled at Port Bell and Maimi beach in the Uganda safari destination of Lake Victoria.
The Island which measures about 2 acres got curved from the mainland about two weeks past before commencing its float in the Munyonyo and Bukasa Bay area with frequent changes in the direction as it drifts from one point to the other which is an amazing thing that can be encountered by people who are on the Uganda safari and tours as of now.
The mass is noted to have twice blocked the Port Bell at Luzira presenting a big threat to the ships that have been coming in from Mwanza in Tanzania and Kisumu in Kenya blocking them from getting a direct access to the berthing terminals at Port Bell. However, this was relived on Monday when the block moved for close to two Kilometers inside the lake towards the Miami Beach before being blown by strong winds that took it from the mainland thus clearing it in one night which was a surprising encounter to happen.
Though the floating Island is seen as threat on the navigation between the East African Countries and the in country connections through water, it can be considered as a natural wonder that Uganda should add to the list of the must encounter tourist attractions pulling various world travelers to plan safaris to Uganda in this short period to have an evidence of the land mass drifting.
During the week it settled at the port; most ships at the pier could not leave and incoming vessels had to change direction to access the docking area. At the moment a range of leisure seekers most of which are local people are flocking the area to have a look at this floating Island. The canoe connection fee is 2000/= to 5,000/= per person.
Uganda safaris/Uganda safari News
Prime Uganda safaris & Tours Ltd