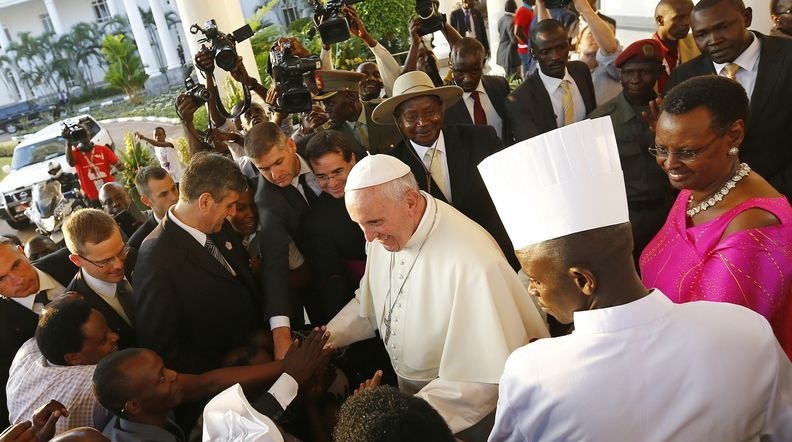 The reigning Pope Francis has just returned from his tour to Africa including Uganda tour and is delighted to announce the uniqueness of Uganda.
This trip marks his first step in Africa which according to him was filled with surprise and amusement over the great welcoming sense held amongst the people including Ugandans. The Pontiff returned to Vatican on Monday following the 7 day trip where he traversed a range of countries including Uganda, Kenya and Central African Republic of which among all Uganda appeared unique to him considering the aspect of Uganda Martyrs whose history is a living Uganda safari product worth exploring
While responding to a range of questions posed by journalists on the papal plane regarding the visited countries, Pope Francis noted that every nation features a distinctive factor where Kenya is marked by modernity while Uganda is marked by the story of the Martyrs which he explored in detail by visiting both Catholic and Anglican shrines – the places where the converts were killed in cold blood on the orders of Kabaka Mwanga.
The Pope arrived in Uganda on the 27th Nov visiting the country popularly referred to as the Pearl of Africa for a period of 3 days where he led an open air papal mass at Namugongo Martyrs Shrine which was attended by counts of believers including travelers that were on safari in Uganda. Other events that marked the Pope’s visit include the Youth meeting at Kololo, the Bishops, Priests and Seminarians meeting, Kabaka (King) of Buganda’s meeting, Presidential Meeting, Diplomatic corps and government officials meeting not forgetting a visit to Nalukolongo Charitable Center. The Pope left Uganda on Sunday for Central African Republic where he is convinced that the desire for reconciliation and peace were sowed.
Uganda stands among the beautiful countries in the world with magical tropical climate, verdant green vegetation, open savannahs and dense forests like Bwindi Impenetrable, towering mountain ranges some of which feature snow caps like Rwenzori Mountains, flowing streams and rivers like the world’s longest Nile river, expanse lakes like Lake Victoria, deep valleys, gorges like Kyambura and steep rift valley escarpments like Kichwamba and Butiaba, myriad of wild game including the classic Big five that form the ground for Uganda safaris, primates like chimpanzees and the world’s critically endangered mountain gorillas that present a rich ground gorilla trekking safaris in Uganda and diverse cultures with remarkable traditions, beliefs and customs that combine to make Uganda a unique country as pronounced by the Pope.