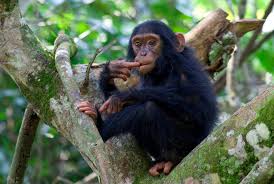 Primates include monkeys, apes and humans; yes humans too! It is not easy to give a full account of the total number of primates today, but the truth is that many of the living things that we see most often belong to the order primates. The majority of people today, with no exception of myself live with a stereotype that primates only exist in the jungle somewhere, swinging from branch to branch and eating “green stuff” (vegetation). Well I intend not to change that mindset; at least not today. Let’s take a Safari and tour to Uganda’s Kibale National Park, the true interpretation of “the Primate’s planet”.
Located next to bigger national parks like Queen Elizabeth (named after the queen of England), Kibale National park is the ideal place to enjoy a chat with our brothers who fortunately are still enjoying the wild. How fun it is to listen to the black and white colobus monkeys gossiping among themselves; to watch the hilariously notorious baboons as they chase after one another; or to just converse with our closest brothers the chimpanzees in their natural homes!
The National park has thirteen (13) recorded species of primates of which the chimpanzee is the most famous. The park has over 1450 chimpanzee individuals, the largest population of the red colobus monkeys in East Africa. It is therefore the best place to see the knuckle walking chimps and the endangered red colobus monkeys while on a Uganda Tour and Safari. Also tucked in this forested national park are the non-gregarious bush babies which tourists might be able to see using a bright flashlight while on a guided night forest walk.
Although there are a number of other wildlife species like the leopards, 500 elephants, and giant hogs, Nature walks at any time of the day present opportunities to see more of the primates than the other mammal species which make periodic excursions to and from the neighboring Queen Elizabeth National Park.
The melodies, chanting, echoes, clapping, together with the dances that welcome you during your Uganda primate safari and tour in Kibale National Park are just many ways to communicate a single message “welcome home”
Satisfied with the heavy full course meal of primates, tourists are served to a sweet dessert course of up to 250 colorful butterfly species and a few creepy and cute amphibians.
Like many other National Parks in Uganda, you are destined to leave Kibale National Park with a personal life story; one that may have you licking your fingers, and an experience that won’t stop lingering in your mind. I would not be surprised if you made a couple more Tours and Safaris to Uganda with your family and friends. Kibale National Park is truly “the primates’ planet”!