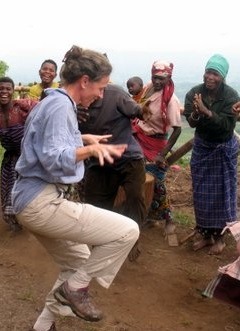 The Batwa are among the short surviving groups of people on the planet earth as they are shorter than an average person. In Uganda, they used to live in the forests of Bwindi, Mgahinga and Echuya all in the southwest of Uganda where gorilla trekking safaris in Uganda are always conducted.
The Batwa were evicted from their ancient home following the rise in the mountain gorilla conservation initiative and they were resettled on the forest margins where they are now always encountered by travelers in Uganda safaris and tours.
However, their heritage remained in the forests and Uganda Wildlife Authority in a bid to apply the community approach in conservation process; it allowed them to continue accessing their heritage. As a result the Batwa heritage trail was launched in both Bwindi and Mgahinga which are the re-known homes of the Batwa. Little did the stakeholders know at this trail could gain more popularity and make it more rewarding for travelers on safaris to encounter.
The Batwa Trail with support form partner agencies and Uganda Wildlife Authority has enabled the Batwa to organize the Batwa guided tours to the forest exploring their ancient homes, their food, wild honey, hunting methods, medicinal plant Species, tree houses among other things that were at the center of the Batwa heritage which at times leave the travelers in a safari in Uganda in a state of amazement.
The revenue generated from the Batwa trail which $80 per person remains with the Batwa community and contributes to their well being in their new places of resettlement. This money contributes to the school development, health care among other communal aspects. This is considered as a great initiative for pro poor tourism in Uganda and a form of compensation for the such groups of people whose lives have been a victim of conservation.
Uganda safaris/Uganda safari News
Prime Uganda safaris & Tours Ltd