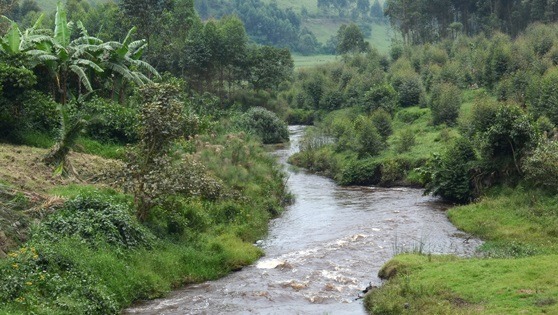 River Rwizi positioned in the south west of Uganda is one of less explored Uganda safari attractions that have got great significance not only to the ecosystem that it flows through but also the human community that live along its course.
Greatly attached to Mbarara town the biggest commercial center in the region positioned at 295km from the Country’s capital Kampala along the geographical coordinates of 00 36’ 48”S, 0300 39’ 30”E, River Rwizi acts as the main source of water for this town which is also a popular stop center for travelers on safaris in Uganda heading to and from the far destinations of south western Uganda
River Rwizi arises from the hills of Buhweju also gathering other water from various tributaries emanating from various sections of Ankole flows for a considerable distance before emptying its waters in the Lake Victoria Catchment that extends to the wetland network of Lake Mburo, Nakivaale, Kacheera, Kihjanebarola among other lakes that have formed a chain of lake and wetland system impressive to encounter on safaris in Uganda especially when takes a panoramic view from the Kazuma outlook in Lake Mburo National Park.
Along its course, River Rwizi supports myriad of people along with their livestock. Rwizi stands as a beautiful river whose sky blue waters and its significance to the areas where it flows has made it part of the people’s heritage that they would not fail to mention it if asked about the must see in Mbarara region while planning a safari to Uganda.
Apparently, River Rwizi is also threatened by the climate change effects and the water levels at times experience considerable reduction threatening those that depend on it including the ecosystem and the domestic livestock.