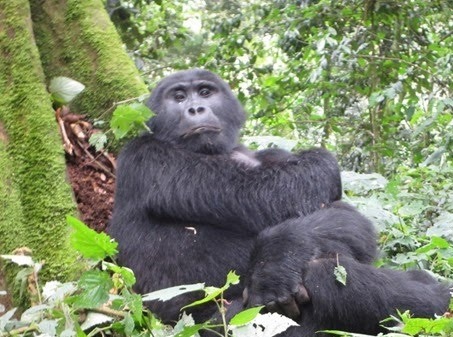 Gorilla trekking safaris and tours in Rwanda are conducted in the Volcanoes national park which is home of an estimated total number of 400 mountain gorillas .Gorilla trekking activity in the land of thousand hills is very interesting and tourists are provided with guiding rules and regulations to follow when on participating in gorilla safaris and tours in Rwanda. The regulations and rules are not given to tourists to oppress them but to help protect the gorillas; local people in the nearby communities as well as to ensure that even the tourists are safe and are able to enjoy their safaris without any harm. Some of the relevant regulations and rules are given below;
Tourists on their Rwanda gorilla safaris are needed to be very humble especially when having face to face encounter with the mountain gorillas and this needed to reduce any disturbance on the visitor’s gorilla trekking safari in Rwanda. Travellers should also avoid looking directly in the big round eyes of the silver back gorilla or any other member of the gorilla family because they tend to react by running after the tourists who look at them direct. However when gorilla runs after any visitor, he or she needs to squat down gently without causing any noise. The experienced guides will always give you tactics, rules, regulations, dos, don’ts but remember to follow them.
Gorilla trekking permits in Rwanda are only given to people aged between fifteen years and above and this is the only age group allowed to visit the mountain gorillas in their natural habitats. However those who are below fifteen years of age are taken to participate in less strenuous activities but full of pleasure .A maximum of eight individual tourists are only allowed to visit one gorilla family and these encounter the mountain gorillas, they are given one hours to interact with the intelligent mountain gorillas. Tourists are discouraged from eating when standing with the mountain gorillas because if one does so, gorillas will be attracted to join them by force. Hence causing problem to tourists and even to gorillas because the food might cause them illness. Cameras with flashing lights are not allowed to be used with tourists taking photos of the mountain gorillas in the middle of the forest and hence tourists planning to have gorilla trekking safaris in Rwanda are encouraged to Len zooming cameras.
The other vital regulation is that tourists with air bone diseases are not allowed to enter the forest to trek the mountain gorillas because these world endangered species share 95% of the genes with human beings hence they are affected by human diseases. Therefore to ensure that gorillas are safe and they remain healthy, visitors with any sign of sickness are no accepted to track the gorillas in Rwanda’s Volcanoes national park. The acts of sneezing as well as spiting when searching for the gorillas in the forest is not allowed and also tourists are not allowed to beat their chests near standing near the mountain gorillas because to the silver back mountain gorilla that is an assault to him.
Rwanda safaris/Rwanda safari News
Prime Uganda safaris & Tours Ltd