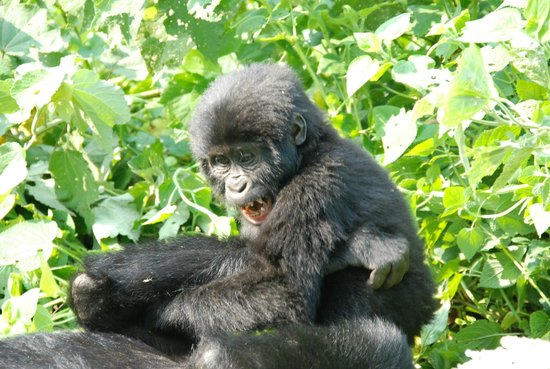 Visiting the world’s few mountain Gorilla Families is one experience that we all have a right to enjoy before we leave this world, so the choice on whether we visit them or not rests entirely on our shoulders. Bwindi Impenetrable National Park is one among four National parks where tourists can see mountain gorillas; the other three being Mgahinga, Volcanoes and Virunga National Parks in Uganda, Rwanda and Congo DR respectively.
At the most recent census (2012), the Uganda Wildlife Authority recorded that the world had 880 mountain gorillas, a number that had grown from 786 in 2010. The same communication also notified that Bwindi Impenetrable National Park had 400 of the world’s total number of mountain gorillas making it a more desirable destination for Uganda Gorilla Tracking Safaris and Tours. We have our fingers crossed, as we await the next release of the total number of mountain gorillas.
But today we will look into the lives of one of Bwindi’s twelve (12) habituated mountain gorilla families called Rushegura. This peaceable family today lives in the Buhoma sector of Bwindi at a place called Rushegura where it split with the Habinyanja family in 2002. Starting with just seven (7) members after the breakup, the group has over the years been able to grow to a large number (20) under the leadership of their only silverback Mwirima who is late in his 20’s.
This not only one of Bwindi’s largest families but it is also one of its friendliest mountain gorilla groups. Some tourists on Gorilla Trekking Safaris in the Buhoma sector have received visits from this family, in the comfort of their lodges. What is even more adorable is how close the littlest ones can come near the tourists, offering them a better chance to take close-up photos or sometimes even “selfies”.
Despite its calm nature, the group has had a few cases of unrest, the biggest being caused by the youthful blackback called Kabukojo who dared to flee with some members of this family in order to form his own. Surprisingly, thirteen members, mainly females followed him to a spot z00m away from where the family normally stays. After some time, Kabukojo returned with his followers to rejoin with the group. Tourists who were participating in Mountain Gorilla Trekking Safaris and Tours in Uganda at that time were able to see divisions in this family even after the reunion, especially during the feeding times.
Today the group maintains its calmness but Mwirima should brace himself, because anytime Kabukojo will either secede or overthrow him. This was a signal loud enough for the aging alpha silverback to “pull his socks up”. Mountain gorilla lovers like me would not be surprised to see another division in Bwindi Impenetrable National Park, or the rise of a new alpha silverback. A Uganda Mountain Gorilla Safari to the Rushegura family continues to be one of the highlights of Uganda tours.