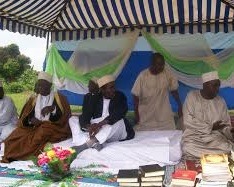 This year as the country and the world in general gather to celebrate the lives of Uganda Martyrs one of the iconic Uganda safari tour products, the Uganda Tourism Board has embarked on inviting all institutions with a Muslim foundation along with other well-wishers to undertake walk on the Special Trail that brings out the emergence of Islam in the region of Buganda.
This was made in conjunction between the Uganda Muslim Teachers Association heads and the Uganda Tourism Board in a press conference that was held jointly on May 23rd 2015 at the Uganda Tourism Board (UTB) offices in Kololo Kampala. Uganda Tourism Board is charged with the responsibility of promoting Uganda as an ideal destination thus increasing the numbers of travelers undertaking Uganda safaris and tours.
The Islam religion is noted to be the first religion to arrive in Uganda with the Moslems known to have arrived in Buganda from Sudan and Egypt as early as 1832. The traders had started coming to Uganda by that time and they brought with them their religion thus spreading the seeds of Islam in the region. There are a range of historical sites in Kampala that are associated with the coming of Islam in the region among which include the Wamala Tombs where the Kabaka Suuna II welcomed the first Arab traders. Wamala Tombs is also among the cultural and heritage sites in Uganda that attract travelers to plan safaris to Uganda.
The Uganda Tourism Board in coordination with Uganda Muslim Teachers Association and Uganda Muslim Supreme Council has gone ahead to identify a range of sites that will form points to connect the trails for Islam in Kampala. The pupils and Students have got a strong role to play towards participating in this trail and raising awareness about the product thus attracting travelers on a safari in Uganda to also participate.
Uganda safaris/Uganda safari News
Prime Uganda safaris & Tours Ltd