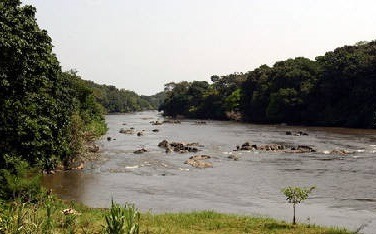 Semliki River though sometimes given as Semuliki is one of the impressive Uganda safari features that are settles on the western rift valley floor in the East African region in the west of Uganda. Stretching to 140km long, Semliki River flows from Lake Edward to Lake Albert all in the Albertine rift in the west of the legendary mountains of the moon – the Rwenzori Mountains. It forms a natural boundary between Uganda and Democratic Republic of Congo. This makes it a feature of political, geographical and touristic significance thus worth encountering by travelers on Uganda safaris and tours.
It can be noted that increased snow-melt from the Rwenzori Mountains along with over grazing and other contributory alterations have cased changes in the River Semliki meanders at its lower reaches. Uganda is losing close to 10 meters of the land per anum to erosion and the silt from gathered by this flow is progressively filling in the south end of Lake Albert. Democratic Republic of Congo is also losing part of its territory as the river changes its course thus altering its current location. This makes it attractive to study and encounter while on safaris in Uganda.
The Semliki River commences its flow near the place called Ishango in the Democratic Republic of Congo at the north end of the Lake Edward and soon penetrates Virunga National Park in which it flows much of its upper river course. The river continues north and until it comes to the west of Mount Baker in the legendary Rwenzori Mountains in the Republic of Uganda. The River eventually leaves Virunga National Park and runs on the western edge of the Uganda safari tour destination of Semliki National Park forming the border between these countries for the rest of the its river course. It finally empties into Lake Albert at its southern end in Uganda adjacent to Bunia in the Democratic Republic of Congo.
The range of people including the Bamba and Bakonjo who are primarily cultivators and the Batuku who are primarily pastoralists with small counts of the Pygmies – the Batwa thrive on the waters presented by this meandering river. Their traditions that have existed for long are impressive to encounter while on a safari in Uganda.