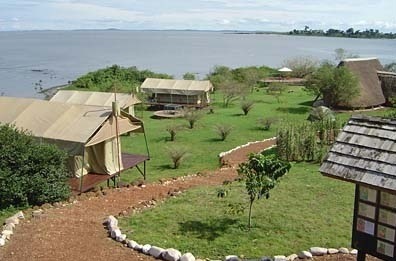 The Ssese islands which are comprised of 84 counts of Islands positioned in the Lake Victoria’s North western direction are slowly growing in popularity to become a darling for range of travelers on safaris in Uganda that prefer to have a rest at a romantic resort.
Politically, the Islands of Ssese also referred to as the Ssese Archipelago is under the district administration of Kalangala which is the only district in Uganda with no main land territory. Lake Victoria which stands as the world’s largest tropical lake, the largest lake on the continent of Africa and the second largest fresh water lake on global scale is a wonder of its own and a considerable attraction to a range of travelers on Uganda tour.
Ssese Islands features the largest Bulago Island and it is this Island that has been developed to feature great resort environment suitable for relaxation and romance. The headquarters of the district are in Kalangala town. The Kalangala district is around 51km thriving amidst the expanse water mass in the south west of Entebbe peninsular where the Entebbe International Airport which is the country’s main gateway and used by Uganda safari undertakers to connect to uganda.
The Ssese Islands are partitioned in two (2) groups including the largest Bugala group followed by the Koome group to the North West. These mentioned groups are set apart by the Koome Channel that is an extension of Lake Victoria water mass. The Bugala section features a range of other Islands including Bugaba, Bubeke, Bufimbira, Boyoya, Bukasa, Funve and Serinya. The Koome group features the Islands of Luwaji, Damba and Koome.
Undertaking the romantic encounter in the Ssese Islands is an exciting moment that you can ever have on the interior of the continental lands of Africa. It is a magical tropical paradise that presents swimming encounter in the fresh waters of Lake Victoria, sun bathing experience on the sandy beaches, sport fishing and engaging in beach sports of all sorts that will make your safari in Uganda a magical wonder of a life time.
The local people named the Bassese tribe inhabit the Ssese Islands and feature great similarity with the mainland Baganda and the Eastern Basoga. These people have lived on these Islands for centuries and thus feature great heritage that can be explored to add spice to your resort experience. The ancient European travelers like Henry Stanley visited the Islands and were mesmerized by these people who had a distinguishable skill of building canoes.
The Ssese Islands feature wildlife including the lush flora and the fauna like colobus monkey, vervet monkey along with birds such as the robin-chats, hornbill, barbets, weaver, turaco, flycatcher, paradise fly catcher, fish eagle, kingfisher, brown-throated wattle-eye, palm nut vultures and great cormorants along with beautiful butterfly species. These can be explored by taking a nature walk on the Island while on your tour in Uganda. Ssese Islands can be accessed by taking a ferry from Nakiwogo in Entebbe or from Bukakata if one is connecting from the Masaka side.