THE STORY BEHIND THE EXTINCTON OF LIONS IN RWANDA

Home » THE STORY BEHIND THE EXTINCTON OF LIONS IN RWANDA 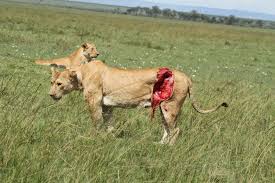 Lions form the Big 5 land animals and these unique and threatening species used to inhabit the Akagera National Park and used to among the prime Rwanda safari products before they faced extinction whose cause has been a question of the time. It can be noted that by 1990, Rwanda had about 300 lions as noted by An American conservationist, Charlene Jendry who had made a safari to Rwanda during that time. On her return in 1995, Jendry notes that the protected area had changed and the Big cats’ number was on a rapid decline forging the way to extinction as she notes on her second Rwanda safari tour.

The question is what could have caused this unfortunate abrupt lion disappearance. The extinction of these Rwanda safari products in Akagera National Park is surrounded by the crisis that hit Rwanda from 1990 – 1994. After the infamous genocide in Rwanda which did not only leave 800,000 people dead but also reduced drastically the numbers of people undertaking safaris to Rwanda, the good number of refugees who had been dispersed by the crisis and even that one of 1959 returned home of which some were cultivators whole others were pastoralists. This meant that there was great need for Land in this small country that is slightly smaller than Maryland which ended up causing land struggles and led to encroachment. In response, the government degazetted part of the Akagera National Park from 2500 to 1200 square Kilometers and distributed it to her citizens. This in return paved way for human – wildlife conflict since animals including lions were attacking people’s property like cattle due to their close proximity to their habitats which generated anger in the hearts of the surrounding communities that were later to hatch the plan of exterminating the lions. The local people tried various ways including hunting the wildlife but did not yield a lot in return which prompted them to resort to poisoning. The pastoralists started poisoning the carcasses which in turn claimed the lives of a range of lions and they finally got extinct in 2000.

The government of Rwanda has had various efforts to restock the lions which include the failed importation of lions from South Africa and the present arrangement with Kenya which is also being opposed by the Kenyan conservation Authorities claiming that Rwanda has not cleared the issues that caused the extinction of their own Lions.