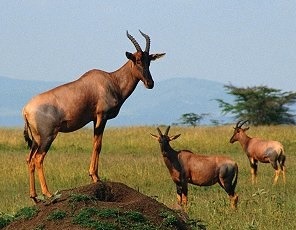 Scientifically referred to as Damaliscus lunatus jimela, Topis are notably fast and social Species of antelopes belonging to the Damaliscus genus thriving in the semi deserts, savannah and the flood plains of Southern Sahara and is one of the common wild game encountered on safari in Uganda
Regarding the description, the Topi resemble a Hartebeest but it features a darker coloration and do not have horns that are sharply angled. They feature elongated heads, reddish brown bodies featuring dark purple patching on the upper legs, mask like dark face coloration and a distinct hump at the neck base.
The Topi horns are ringed and have a lyrate shape and their coat features short shiny hairs. Their weight ranges from 68 – 160kg while their body length is about 150 – 210cm and the tail has a length of 40 – 60cm. The Topis are remarkably tall Species ranging from 100 -130cm in height at their shoulder. The male Topis are considerably larger and appear darker than female Topis. Their preorbital glands secrete clear oil while their front legs feature hoof glands. The Topis under pressure can run to more than 80km/h though they greatly do jog travel. They are noted to be among the fastest African antelopes as viewed by game viewers on Uganda safaris.
Regarding the range and ecology, it can be noted that Topis feature a long though patchy spread because of its preference for grasslands in savannah and arid biomes. The effect of human hunting and the destruction of its habitat have further facilitated this spread. Apparently, the Topi antelope can be encountered in the countries of Uganda, Burundi, DR Congo, Tanzania, Rwanda and Kenya however is now regionally extinct in Burundi.
Primarily the Topis thrive in grassland habitat that range from open plains to impressive savannahs. They also thrive in habitats in between the open grasslands and the woodlands and tend to stay on the edge and would keep under the tree shade in times of hot weather. The Topis prefer to dwell in green grass pastures of medium length featuring leafy-like swards. They would dwell more in areas where the green plants would extend to the dry season and close to the water points. The Topis are considerable selective grazers and apply their long muzzle and the lips that are flexible thus able to forage on the plants that are very fresh. While foraging, the Topi do small bites but at a fast rate. This antelope usually frequent flat lowlands of an elevation 1500m and below and when they have got accessibility to adequate green vegetation, the topis do not require taking water always. The Topis would drink more while feeding on dry grass and they usually use vantage points like termite mounds to gain clear looks of the surrounding area.
It can be noted that the Topis are either many or do not exist in the area. The populations that are scattered usually wither out or increase. The Topi health would depend on green vegetation accessibility and would migrate on to new pastures such as in Serengeti National Park where they move along the wildebeests, the gazelles and zebras.
The main predators of Topis include; the lions, cheetahs, leopards, the spotted hyenas, hunting dogs. The Calves of Topis are susceptible to servals, jackals, caracals, large eagles and pythons. It can be noted that the Topis would have low predation rate when other species are present. Calves are also vulnerable to.
Regarding social structure and reproduction, the Topis feature a social organization that is most diverse among the antelopes. The herds of Topis feature a perennially sedentary dispersion form or are perennially mobile aggregated or anything amidst. This arrangement would depend on the ecology and the habitat where they thrive. The reproductive organization would range from being territorial system to gatherings that feature short lasting territories and lek arrangements. In grassland patches that are surrounded by woodlands, the Topis would thrive in sedentary-dispersion arrangement.
The Male Topis set up territories to entice female herds along with their offspring and according to the patch sizes, the Topi territories can be 4km2 or beyond. The female fidelity in a given territory can last three (3) years and the female thriving in the territories performs as part of the male harem that is resident. The Topi herds are usually closed unless the new females are allowed in the group. In situations where the resident male is absent, the female dominant would undertake the defense of the territory by assuming the male behaviors including the high stepping display and rocking canter. In areas where there is great Topi concentration like the Uganda safari

site of Queen Elizabeth National Park Uganda, the Topi would move across the plain and then form territories in the resting periods.
In Rwanda’s Akagera and Kenya’s Maasai Mara, the male Topis would form leks which are simply clustered together territories. The dominant males are at the lek’s center while the periphery is dominated by the less dominant. The Male Topis would mark their territories with the piles of dung and would stand on them in erect posture dedicated to fight any invading male. The Estrous females enter the leks either in groups or alone and then mate with the males in the Lek’s Center. The Center males would increase their success in reproduction if they are close to water bodies. The females tend to compete amongst themselves for the males that are dominant. The females experience estrous for only one day in the whole year and prefer to mate with the males that they have ever mated with though the males would try to mate with many new females as they can. As a result, the preferred males would try as much as possible to balance between the females. The females would disrupt aggressively the copulations that their preferred males would have with the other females. The inferior females would have their copulations sabotaged by the dominant females but the dominant females would have stable copulations. The Male Topis would finally counter attack the females and stop mating with them anymore.
The main Topi birth appears from October to December with close to a half of them happening in October. The calves follow their mothers after birth; the mothers isolate themselves from the herd to do the calving while the calves would seek keep in hiding places during the night. The calf would stay with the mother for a year up to when it gives birth to a new calf. The Topis feature a gestation period of 8 months
Regarding Conservation and status, though the Topis are not all that threatened and as a result remain common, they have reduced from considerable parts of their initial range. They feature 15 years of life expectancy and are listed on IUCN red list as least Concern.