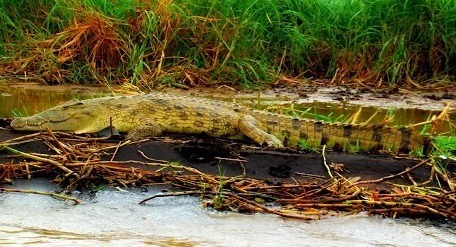 The Uganda Wildlife Authority a semi-independent public institution that is responsible for managing wildlife in Uganda including those in protected areas is in the plans of relocating the Crocodiles one of the famous Uganda safari species to a crater lake in Maramagambo forest.
The Maramagambo Forest is one of the expansive forests that are remaining in the East African region and has got counts of features including birds, bats python, unique flora and a range of crater explosive craters making it one of interesting micro destinations that are visited by travelers on Uganda safaris and tours.
The Crocodiles to be relocated will be removed from the water bodies of George and Edward which have posed a great danger to human lives as they eat them. This has created wildlife human conflict around this area which is a threat to other wildlife species that exist in the Uganda safari tour destination of Queen Elizabeth National Park.
The plans to relocate the animals comes at a time when the local communities at the landing sites of Rubirirzi and Kasese are miserably living along with these merciless beasts. The new area is far from the human communities thus posing little threat to the human lives as previously done. This will in turn create community harmony with wildlife ensuring their continued existence and eventually the continued safaris to Uganda.
Uganda safaris / Uganda safari News
Prime Uganda safaris & Tours Ltd