The Ugandan Mangabey; a Novelic primate species in Uganda

Home » The Ugandan Mangabey; a Novelic primate species in Uganda 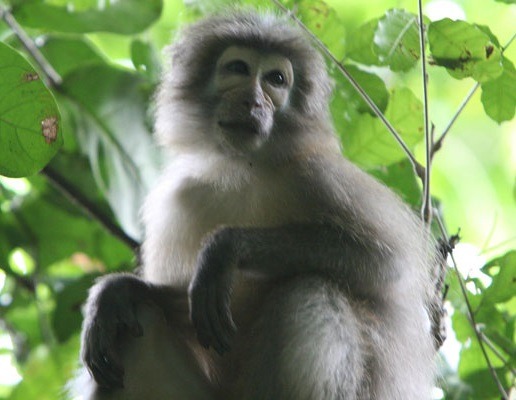 The Ugandan Mangabey also known as the Lophocebus ugandae is noted to a descendant of old world monkey that is restricted to Uganda alone. Initially thought to be belonging to the grey cheeked mangabey populations, the famous taxonomist Colin Gloves undertook the upgrade of the Ugandan section to new Species and named them L. Ugandae.
The realization of these new species occurred when the Professor realized that they are smaller than the known grey-cheeked mangabey and also has a shorter skull and a relatively smaller face. Adding to the group of 19 Species of Primates that are available in Uganda and highly sought after by travelers on primate safaris in Uganda, the Ugandan Mangabey can be explored right here in Mabira forest that is positioned at 60km from Kampala city.
Groves noted that when he revised his research which he carried out three decades past, it was revealed that these Species were smaller compared to their colleagues in different parts of the world. In his report, he proposed that the Species should be given due attention in terms of conservation and added to endangered species list of International Union for Conservation of Nature (IUCN) and this would grant them improved priority just like Chimpanzees and Gorillas.
The grey-cheeked mangabey are spread in various parts of the world including the Congo forests stretching to the north of Angola. In destination Uganda, they are noted to thrive in areas of Itwara, Semliki, Kibale, Mpanga, Bugoma, Bujuko, Mabira and Sango bay.
It can be noted that the biggest concentration of this Species is in Mabira Forest and this is seen as positive step to enhancing its eco-tourism encounters. The Ugandan Mangabey consumes fruits and dwell in the interior of the forest and its upper layers which limits them not to destroy crops outside the forest.