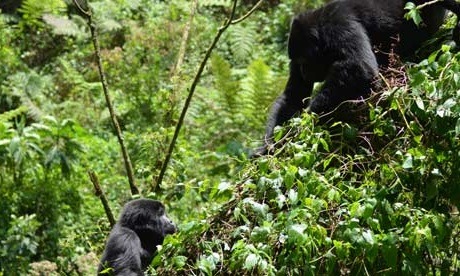 The critically endangered Mountain gorillas that apparently thrive in Uganda’s Bwindi Impenetrable National Park and the entire Virunga Massif comprised of the Rwanda’s Volcanoes National Park, Congo’s Virunga National Park are at the helm of the most sought after Species on the African Continent prompting the range of world travelers to plan gorilla safaris to Uganda and Rwanda.
The Mountain gorilla populations have been changing with time and following their 1902 scientific discovery which aroused the world’s interest in them, a range of efforts have been dedicated to their conservation thus favoring the increase in their numbers which has put the hopes for gorilla travel including gorilla safaris in Uganda to remain sustainable.
The mountain gorillas also passed through dark times with lots of people picking interest in hunting them for leisure, prestige and the local communities poaching on them. They were listed as critically endangered because their fate was indeed at stake. From the efforts of various conservationists including the Dian Fossey, the plight of Mountain gorillas were up lifted and gradually the sustainable means for conserving them have been devised among which included gorilla tourism. This gave rise to gorilla trekking safaris and tours in Uganda.
As a result of these initiatives, the mountain gorilla populations have increased to 880 individuals bringing smiles in the faces of the gorilla conservationists and the Uganda gorilla safari undertakers not forgetting the travelers that undertake gorilla safaris to Rwanda.
The increase in the mountain gorilla populations from 620 in the year 1989 to their current numbers cannot be taken for granted and the conservation efforts and the role of gorilla dollars have  hailed. The 400 individuals are known to be thriving in Bwindi Impenetrable National Park usually visited in Uganda gorilla trekking safaris while the rest (480) exist in the Virunga massif.
Uganda gorilla safaris/Uganda gorilla safari News
Prime Uganda safaris & Tours Ltd