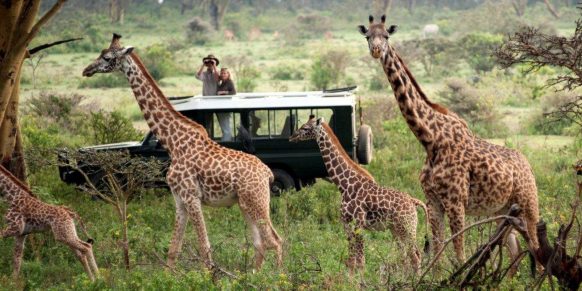 The Maasai Mara National Reserve Chief Administrator Christine Koshal banned these tour companies after allowing their clients to leave their Tanzania safari vehicles during the wildebeest migration on August 8th and 9th, 2020.
“You violated the park rules and regulations by obstructing wildebeest crossing and also putting the visitor’s lives at risk. This is by allowing them to alight at undesignated points in the game reserve,” read a notice to the Tanzania tour companies.
Koshal said that the management had suspended the companies for 30 days effective from August 10th. “Therefore, you will not be allowed inside the park for whatever reasons since you violated the park rules and regulations,” Koshal directed.

Every year between July and October over two million animals migrate from the Serengeti National Park in Tanzania to Maasai Mara National Reserve in Kenya. It’s considered as one of the seven new wonders of the world which attracts a lot of local and international tourists.

“No more off-road driving and we are strict on this. All tourists who are on game drive should stick to the road. We do not want disturbance of wildlife on their natural habitats,” he warned.

He has also directed that all the short-cut routes to the park be closed, saying the park should only be accessed through Sekenani Gate, Ololaimutia, Musiara and Takel gates.

The move by the three tour companies to flaunt the rules have sparked sharp criticism from wildlife enthusiasts who have thrown their weight behind the park administration to punish the rogue tour drivers.