Tool use in the great chimpanzees of Uganda

Home » Tool use in the great chimpanzees of Uganda 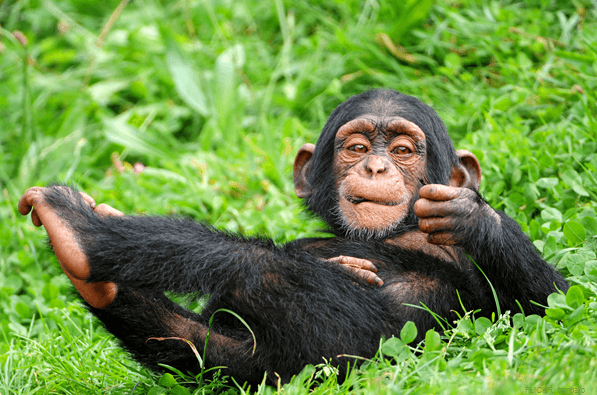 Apes are undeniably the wisest of species that roam the earth today. Man being part of the ape family is a true reflection of the intelligence level that is ascribed to the apes. Man has been able to create things that are way out of this world including the new forms of technology that pop up every other day. Although he is the most developed being among the ape family, intelligence is not confined to him alone. All the other members of the Ape clade including chimpanzees, bonobos, gorillas and orangutans have a fascinating approach to life and some of these can be seen when on a Uganda Primate Safari.
From the wealth of intelligence in the fabric of the great apes, tool use has emerged as one of the most incredible comportments that have been observed in some of Uganda’s larger primates. Previously, scientists placed humans in a category of their own because of the distinction in which they did their things, like the use of tools; which was not seen in the other animals. But this is bound to change, now that the other less developed apes not only share great similarity in genetic composition with man but have also taught themselves mannerisms that were thought to only be restricted to humans. A Uganda primate tracking Safari will lead you to one of the protected areas where you can see for yourself, the intelligence of the Chimpanzees.
Chimpanzees which are man’s closest cousin use tools more than the other wild members of the ape family. From a list of items available to them in their habitats like leaves, stems, rocks and branches; chimps are able to make their lives easier by making tools. They make tools for feeding especially when they want to reach for some ants or termites in an anthill. They will break a twig, bite onto it and then stick it into the anthill for the termites to climb on (somewhat like fishing) pull it out as soon as they feel that the ants have climbed on.
Some tourists on Safaris in Uganda have been able to observe chimpanzees eating the meat of smaller mammals like duikers and bush babies, but the manner in which they hunt them has not yet been revealed. Some scientists however say that chimpanzees break branches and sharpen them using their teeth to make a finely sharp pointed edge. Armed with their lethal weapon, they sneak up on their prey and skilfully stub it (the same way native African forest hunters do).
Chimpanzees have a great fear for water, but due to undeniable circumstances, they sometimes have to cross shallow streams to access food on the other side. But before they cross, chimps measure the depth of water using a stick until they find the shallowest point of the stream from which they can cross. Some chimps also use large leaves as drinking containers. They will either use the leaf as a whole to gobble up water from the stream or they will first chew on the leaf to make it sponge-like and then dip it in the water to get wet; after which they can suck out the water from it.
Perhaps the most common tool use that almost every tourist on a Chimpanzee trekking Safari gets to see is building nests. Every time chimpanzees prepare to sleep, they build a new nest in a process called “nesting”; similar to the way humans lay their beds. Chimpanzees gather branches and leaves, and weave them together to form a perfect sleeping spot for the night. Chimps will never sleep in the same nest for a second time.
In a nutshell, chimpanzees make tools depending on the elements available in their habitats; the circumstances at a particular time; and in time of need. They make tools to feed, to hunt, to protect themselves, to clean themselves and sometimes to play with. These apes have not been taught the art of tool use; you might wonder where they learned this from, but for now we can only believe that it is because of their intelligence. Tourists in Kibale and Budongo forests are offered the chance of spending a full day with the chimps in what is called a Chimpanzee Habituation Experience (CHEX); and they can watch as the wild chimpanzees do things that we didn’t know they were capable of doing.