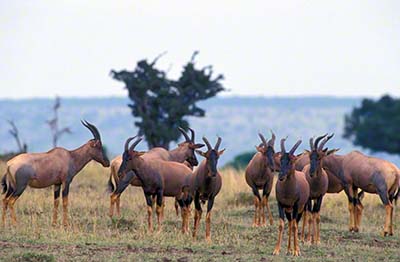 Also referred to Damaliscus lunatus jimela, the Topi is one of the popular antelope wildlife species viewed by travelers on wildlife safaris in Uganda. Physically, they share a lot in common with the Hartebeest but they possess a dark coloration and do not have sharp angled horns.

The topis are marked with elongated heads, hump at the base of the neck, mask like dark coloration in the face, reddish brown bodies while the upper legs feature dark purple patching. The coats of Topis feature shiny short hairs as viewed on Uganda Safaris and tours. In terms of size, the Topi stretch from 68 – 160kg while the body length can be 150 – 210cm and the tail is 40 – 60cm. Their shoulder height is 100 – 130cm making them tall species.

Topis thrive in grassland habitats which include open plains, savannah woodland and arid landscapes. They prefer to feed on green grass of medium height and would dwell more in places where such green grass push into the dry season especially close to water. They are selective feeders and thus they utilise their elongated muzzle and the flexible lips to extract the freshest plants and while foraging, they take in small quantities but at a very fast rate. These antelopes are common in lowland areas below 1500m and normally stand on termite moulds to gain view of the surroundings including their predators. They exist in herds and thus would be many in the area or absent as scattered individuals are prone to death. Topis also migrate for pasture as it has been observed in the East Africa Safari tour destination of Serengeti National Park moving along with Wildebeests, Gazelles and Zebras.

Regarding the social organisation, Male Topis establish territories which pull a range of females to join them and the size can stretch to 4km2. The Males are always determined to defend their territories and the female prefer to mate with the dominant males and those that they had an intimate relationship before but for males, they aim at mating with as many new females as possible.

The Topis tend to give birth from October to December but it is much common in the month of October. The calf can follow the mother at the point of birth like the blue wildebeest but can also separate from their mothers and find secure hiding place.

The Topis are listed as least Concern on the red list of International Union for Conservation of Nature (IUCN) and apparently thrive in countries of Uganda, Kenya, Tanzania, Rwanda and Democratic Republic of Congo. The predators of Topis include; Lions, Spotted Hyenas and Jackals which majorly prey on newborn. Topis can easily be explored in Queen Elizabeth National Park and Lake Mburo National Park while on a safari in Uganda.