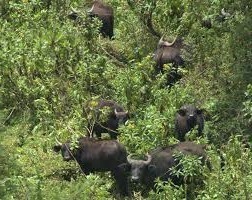 Akagera national park is a park which is located in the east of Rwanda and it’s near to Kibungu city. This park is completely dominated by  savannah. This park has got variety of wildlife and many bird species which have attracted many safaris to Rwanda. There have also been increased revenues which have been collected from the visitors who visit the park at any time of the year.

The park has got a good scenery views which is characterized with many swamps and savannah vegetation. This park is also dominated by lakes that follow the course of Akagera River. This river has attracted many tourists to the park hence increasing safaris in Rwanda.

The park is filled with big herds of elephants and buffalos which have always emerged from the wood lands and drink at the lakes; these have always been watched by the tourists who visit the park, hence enjoying their safaris to Rwanda. There are also giraffes and the zebras which are mostly found in the savannah, there are also antelopes, impalas, oribi, and the bush bucks and all these have attracted many tourists to visit the park.