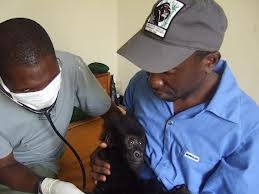 Mountain gorillas are like human beings and they can get sick, this is because these primates suffer from diseases like TB, measles and also diarrhoea and many other diseases which have led to the reduction in their numbers, this has also affected mountain gorilla trekking which has been the main foreign exchange contributor to the country, this has helped in developing the tourism sector with in the country.

The rare mountain gorillas need healthy care so as to be able to attract more tourists to come for gorilla trekking safaris to Rwanda. Many organisations and conservationists have come up to help in  treating the mountain gorillas since they have got a great importance to the economy of the country and also in helping in attracting more people to come for gorilla safaris to Rwanda.

Many personnel’s have come up to take up roles of ensuring that mountain gorillas can stay healthy so that they can be able to attract more tourists who come for gorilla tracking tours to Rwanda. Mountain gorillas both in Uganda and Rwanda have got veterinary doctors who have worked hard to maintain the health of these primates. The doctors also said that the mountain gorillas are different and they can be identified through their nose plates and the particular traits with them. They also know how to communicate with them which makes it easy for them to be treated.

The gorillas mostly suffer from respiratory outbreaks, their genes and those of the people are similar and this makes it faster for them to get human diseases. They are also prone to injuries and poachers. The people who live near the mountain gorilla habitants have direct or indirect contact with the mountain gorillas and they are capable of spreading diseases to the animals. This probably affects the number of gorillas in the national parks and also a direct effect to the number of gorilla safaris to Rwanda.