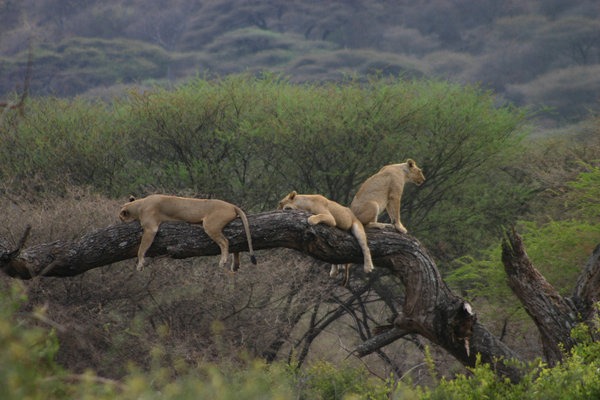 The phenomenon of the tree climbing lions  has for long been considered unique and limited to only two places world over namely; Ishasha sector of Uganda and Lake Manyara National Park in Tanzania offering exciting selling prepositions for Safaris in Uganda and Tanzania.

Reputed by the Tarzan Classic Hollywood movies, Lake Manyara National Park is a popular Africa Safari stop point between Arusha – the main gateway to Tanzania’s northern circuit and the famous Serengeti National Park. And though the park features populations of Hippos and bird life, the sight of tree climbing lions gives it an incredible stand out.

The Ishasha sector to the south of Queen Elizabeth National Park – the most popular Uganda Wildlife Safari destination is another wondrous site where such creatures can be explored. In fact many have argued that the short trees of Ishasha offer a perfect close look of the lions lying on their branches with hanging legs.  Between the upper section of Queen Elizabeth National Park and the Uganda Gorilla Safari destination of Bwindi Impenetrable National Park, Ishasha is a popular point for en route game drive especially in the mid morning when the lions start to climb. Some Uganda tour packages include a night in this sector of the park to increase chances of spotting these lions. The tree climbing lions prefer Sycamore fig trees but can as well climb Acacia and Cactus trees.

Besides these two traditional places, the phenomenon of lions climbing trees has extended to include; Serengeti National Park in Tanzania and Kidepo National Park in Uganda. Other events have been reported in Savuti region in Botswana and Kruger National Park in South Africa adjacent to Crocodile Bridge.

A range of reasons have been gathered to justify the lion tree climbing phenomenon and these include; desire to gain a better view of the prey, seeking fresh air and running away from Tsetse flies and sharp spearing grass on the ground. However, regardless of the reason, it can be noted that these lions still lack the ability to easily move up or down the trees like leopards.