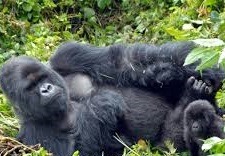 Uganda is endowed with almost a half of the world’s endangered mountain gorillas in the Impenetrable forest of Bwindi alone containing 400 out of the 880 mountain gorillas that currently exist in the world. The remaining thrive in the Virunga massif and yet Uganda’s Mgahinga Gorilla National Park is part of the massif which in turn gives Uganda a considerable advantage when it comes to mountain gorilla numbers which have spurred gorilla trekking safaris and tours in Uganda.
The gorilla tracking in Uganda began in 1993 with the final habituation of the Mubare gorilla Family in the hilly forested landscapes of Bwindi – Buhoma sector following two years of habituation. The habituation of the gorilla families continued and apparently Uganda boasts of twelve habituated gorilla families distributed in four gorilla trekking regions.
Buhoma being the pioneer of the Uganda gorilla trekking safaris encounter is apparently more developed in terms of gorilla tourism than other regions. Its three gorilla families of Mubare, Habinyanja and Rushegura gives remarkable wonders to the travelling Uganda gorilla safari undertakers. The region of Ruhija which is 48km from Buhoma has three gorilla families of Oruuzogo, Bitukura and Kyaguriro and is the highest altitudinal point in the park presenting rewarding hikes. The Rushaga region in the south of Bwindi is greatly known for its Nshongi gorilla family which is the largest gorilla family that has ever been habituated. However, this gorilla group split leading to formation of five gorilla families namely; Kahungye, Bweza, Busingye, Mishaya and Nshongi which makes the region to have many gorilla groups in the whole of Bwindi. The Nkuringo region has one gorilla family and lies in the far south west of the park. The Nkuringo family is known for climbing the steep hill in the area which makes it very challenging to trek while on gorilla safaris in Uganda.
The Mgahinga Gorilla National Park in the south western corner also has a habituated gorilla family called Nyakagyezi and also presents a group for gorilla safari tours in Uganda. Trekking gorillas in Uganda is very rewarding as it involves active hikes which are an experience in themselves. The amazing scenic landscapes, a range of wildlife and cheaper gorilla permits makes trekking gorillas in Uganda rewarding than that of other destinations.
Uganda safaris/Uganda safari News
Prime Uganda safaris & Tours Ltd