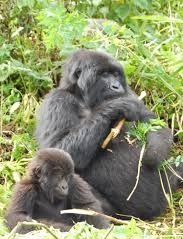 The gorilla trekking in Uganda is one of the prime safari activities that the country is proud to have in possession along with magical Uganda Wildlife safaris, the birding safaris in Uganda, Mountaineering, Chimpanzee trekking, fishing safaris and Cultural tours. In her protected area of Bwindi Impenetrable National Park, there lies a minimum of 400 of the critically endangered apes – the mountain gorillas and it is from this group that several groups have been tamed / habituated to accommodate humans.
Apparently, there are 12 gorilla families that are free to people and willing to interact with them with no wild characters unless provoked. The Oruzogo Gorilla family is among the three gorilla families that have a habitat in the eastern sector of Bwindi named Ruhija. The sector shelters other two families named the Kyaguliro which previously was a research group and Bitukura gorilla group. All these are fully habituated and well explored by travelers on gorilla safaris in Uganda.
The Oruzogo gorilla group features a count of 23 members including one Silverback and is noted to be among the recent introduced groups for gorilla trekking in Uganda having been opened up on June 20th 2011. The Oruzogo Gorilla Family is led by the dominant Silverback called Tibirikwata.
Tracking the Oruzogo Gorilla Family involves purchasing the gorilla permit of the Ruhija region which goes for $600 for the foreigner staying outside the East African partner states, $500 for the foreigner with valid work permit in the partner states of the East African Community and then 250,000/= for the natives of the partner states. Though the Uganda Wildlife Authority tends to offer discounted gorilla permits in the months of April through May and the month of November, it is always publicized at the beginning of the year and if offered, the gorilla permit reduce to $350, $300 and 150,000/= respectively making it cheaper and cost effective for those interested in undertaking low cost gorilla safari in Uganda.
The encounter involves driving through magical countryside landscapes of Uganda including the traditional rangelands of the Banyankole pastoralists before being fronted by the scenic Kigezi Highlands and Virunga Mountains beyond. You branch off from the main Kabale – Kisoro road at 10km from Kabale town taking the north direction where you drive through fascinating highlands of Kigezi with sharp corners steep slopes up and down before entering through Ndego gate to the Ruhija section of the park. The accommodation of your choice is booked in advance and can be either Broadbill Forest Camp if interested in budget stay or Gorilla Mist Camp which suites both Midrange and Luxury.
The morning would see you gather at the Ruhija park headquarters and a special request is passed on to the rangers allocating the gorilla families by your safari guide and you get yourself allocated Oruzogo Gorilla family and though it’s not guaranteed as it is not provided for in the arrangement, a humble request might grant you triumph.
The Oruzogo features young gorillas which are playful thus making it vibrant and interesting to encounter in Uganda gorilla safaris. Following the day long hike traversing the dense jungle of Bwindi, exploring magical flora and birds along with gathering great pictures and memories, you are rewarded with a gorilla certificate indicating that you have indeed tracked the Oruzogo gorilla family. You can opt to spend your evening down at Lake Bunyonyi, chilling at the lodge or taking a community tour to the Batwa People.