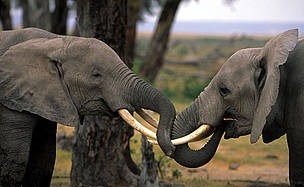 Located in one of Africa’s most diverse and auspicious wildlife-rich regions, and adjacent to major tourist destinations, Uganda, an East African country seems to be moving faster than even her closest neighbors in the struggle against Illegal Wildlife Trade. This is a concerted attempt towards ensuring that Safaris in Uganda continue to deliver the greatest level of value and fulfillment to its visitors
With profound knowledge about the sacred value of wildlife not only measured economically but also spiritually, the Ministry of Tourism Wildlife and Antiquities put together a new National Wildlife Policy which was approved in March 2014 by cabinet, in which strategies to limit unlawful wildlife trade were proposed and have since then guided the struggle.
In a recent meeting in Kasane (Botswana) that served as a follow-up for both the London Conference on Illegal Wildlife Trade (2014) and the African Elephant Summit in Botswana’s capital Gaborone (2013), Uganda’s Minister of Tourism described the already existing results of the proposed strategies.
Adding to aggressive propaganda against this illicit trade, Uganda has sturdily stepped up her campaign evidenced by the seizure of about 30 (thirty) horns of rhino, over two (2) tones of ivory and up to 2 (two) tones of Pangolin skins at the country’s International Airport in Entebbe. This long term conservation effort will continually communicate the country’s dedication to the protection of wildlife trophies on which many of the Safaris to Uganda thrive.
Uganda will not be blinded by the quick short term economic gains from illegal wildlife trade, neither is she going to sit-back and watch her wildlife gems being wiped out day by day. The growing demand for wildlife products like ivory and rhino horns in countries like China and Vietnam is not a venture worthwhile enough to grant this illegal trade a ‘benefit of the doubt’. The continued desire to avail visitors with awe-inspiring Safari Tours in Uganda will continue to inspire fights against illegal wildlife trade.
Uganda will not boast of having completely put a stop to poaching but can be applauded for reducing it. The struggle has a remarkable number of challenges but is greatly rewarding. This effort is only going to see Safaris in Uganda maintaining their prime position on the African continent.
Uganda safaris/Uganda safari News
Prime Uganda safaris & Tours Ltd