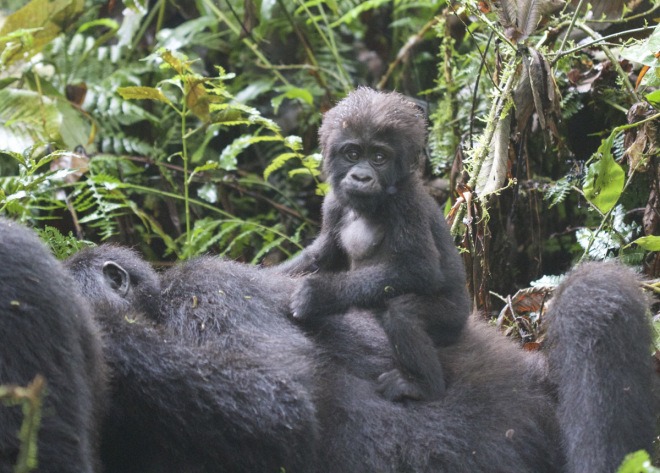 Bwindi Impenetrable National Park to the South West of Uganda is the most popular Uganda gorilla safari destination with a minimum of 400 Mountain Gorilla. Even when it features the largest concentration of Mountain Gorillas among all parks in the world, luck seems to still be on its side as many other baby Mountain Gorillas are being born.

Bushaho Gorilla Group one of the two newly habituated groups in the south of Bwindi is proud to have received a new infant on August 21st 2016.  In Nkuringo Sector, one of the famous Uganda gorilla trekking regions of Bwindi apparently stands with an addition in its gorilla count and the Conservation Area Manager Mr. John Tibesigwa confirmed the birth.

Bushaho gorilla group features eight (8) members with Bahati as the dominant Silverback. The mother of the newly born is known as Bunyindo. Bushaho is part of the broader 36 Mountain Gorilla groups existing in Bwindi Impenetrable National Park of which 12 are perfectly habituated and have always been encountered on gorilla safaris and tours in Uganda, the other two are undergoing habituation while the rest are still wild gorillas.

According to Mr. Tibesigwa, the inter birth period of Mountain Gorillas in Bwindi Impenetrable seems to be around five (5) years which is slightly higher to about three years that has been observed in the adjacent parks of Rwanda’s Volcanoes and Congo’s Virunga. The Mountain Gorilla gestation period is about 8 ½ months.

The local community is as well very excited about the arrival of the baby Mountain Gorilla which marks the positive trend of Mountain Gorilla population in the park, the country and the world at large. Mr. Ivan Batuma the Head of Kigezi Tourism encouraged the Uganda Wildlife Authority to always organize public gatherings while naming the baby gorillas as a means to promote gorilla safari tours in Uganda.

Mountain Gorillas are part of the Great Ape Species known to be thriving in only three countries on a world scale namely; Uganda, Rwanda and Democratic Republic of Congo. They are listed as critically endangered by the International Union for Conservation of Nature because of their low birth rate and the fragility of their habitats amidst one of the world’s population concentration and instability.