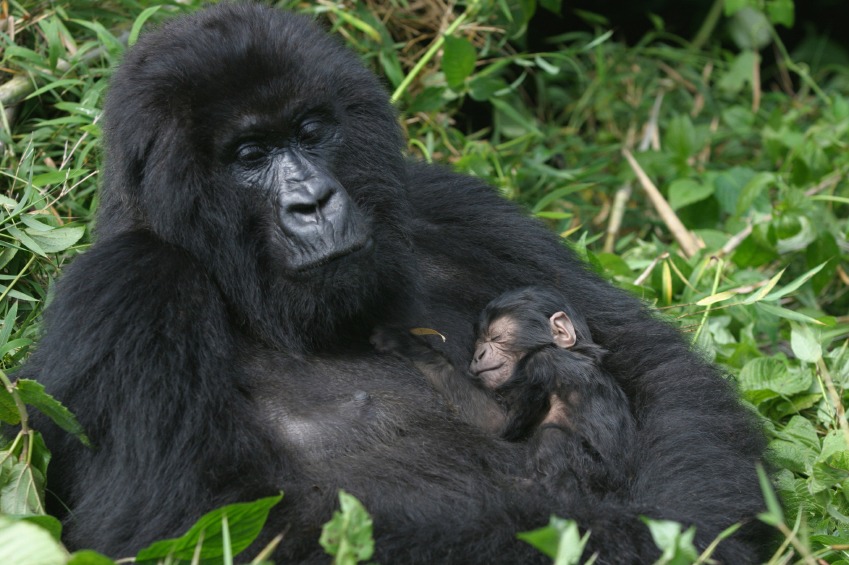 Mubare Gorilla Family one of the three habituated Mountain Gorilla groups in the Uganda trekking safari region of Buhoma – Bwindi Impenetrable National Park struck a magical wonder when two of its members attained successful births in the period of one week.

Noted World over as critically endangered, the Mountain Gorillas are characterized by low birth rates and hence very uncommon for them to register two successful births at such close interval.  A total of 880 Mountain Gorillas are known to be remaining in the whole world of which a minimum of 400 individuals are known to be thriving in Bwindi Impenetrable National Park. This has made this park a key in the Mountain Gorilla conservation efforts along with being an exciting destination for Gorilla Safaris in Uganda.

On July 23rd and 28th, the females Karungi and Kisho gave birth to healthy baby gorillas increasing the Mubare Gorilla group to 14 members.  The born babies are believed to have been sired by Kanyonyi – the leading Silverback and a key member always explored by trekkers on Uganda gorilla safari.

Bwindi Impenetrable and Mgahinga National Parks are noted to have had ten (10) gorilla babies and one death since the beginning of 2017 according to Conservation Area Manager Mr. Pontious Ezuma.  He attributes the continued birth to better conservation efforts which makes the Gorillas to feel safe and settled to have babies.

The survival of Mountain Gorillas maintains the product base for Gorilla tourism which apparently contributes around $10m to the tourism earnings of Uganda.  Tourism sector in general remains the leading foreign exchange earner for Uganda followed by remittances from abroad and Coffee.

Prime Uganda Safaris & Tours is dedicated to arranging a memorable gorilla safari that will enable you spend time with these newly born Gorilla babies!