UGANDA HAS THE SMALLEST CHURCH IN THE WORLD – UGANDA SAFARI NEWS 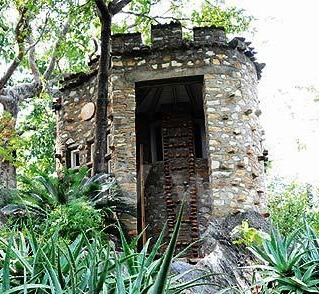 At Biku hill, 18km drive from the town of Nebbi in the north west of Uganda there dwells a manmade wonder that can only be encountered while on safari tours in Uganda. The world’s smallest church which stands at a width of approximately 2.5m and a height of 8ft is an artificial marvel that crowns the jaw-dropping beauty of Biku hill.
This tiny worshipping place has the capacity of accommodating three (3) people including the priest. It dates back to 1996 when a Korean national Pastor Song in conjunction with the currently retired Archbishop of the Church of Uganda His Lordship Henry Luke Orombi established this amazing structure that have in turn picked the interest of travellers on Uganda safari holidays.
The center is aimed at spiritual healing for persons and church groups where by people who visit the site encounter God in a special way, have vision for their future and become bold soldiers for the gospel. The nine prayer points allow people to pray, praise and meditate on the word of God as Africans prefer being on the move. The first prayer point is on top of the hill and is formed of a big cross, the point two is opposite to number one and is a Lilliputian building crafted in commemoration of Jesus Christ with 12 windows in the western and eastern sides demonstrating the 12 disciples of Jesus Christ and its where pilgrims pray for the neighboring countries of Congo, Sudan, Rwanda, Tanzania and Kenya for spiritual peace and revival. This point offers the impressive panoramic views of Namrwodho Falls which is a habitat to the rare shoe bill stork that is always on the lists of travelers while planning safari holidays to Uganda.
The point three is crafted in the map of Africa with two entrances. It features ten (10) windows symbolizing the ten (10) commandments. The point is dedicated for praying for the all African states especially Islamic countries. The points 4, 5 & 6 are positioned with in a spacious calm garden with point four crafted like a heart demonstrating Christ’s love with a cross made of 33 stones signifying the 33 years of Christ Jesus. The point five is in the shape of arrow head signifying the youth speed while prayer point five contain 66 windows that demonstrate 66 books of the bible with 39 windows at the back signifying the books of Old Testament and 27 windows  signifying the New Testament. The point has three (3) doors crafted like a standing man demonstrating those who are well equipped with God’s word. The six prayer point is crafted in an alter shape which is a living testimony that church is a living offering to Christ’s mission while the rough stones on the cross justify that Christians are living stones. The point seven (7) is a round structure like the shape of the globe and is located at the back of a towering rock with an open ended cave at its base of which one is obliged to crawl from end to another to have a glimpse of Christ’s suffering where a traveller on Uganda tour would find this five minute crawl through the cave’s darkness terrifying with a thought that the cave might collapse and bury him/her underneath.
At the point eight (8), there comes the world’s smallest church – the Bethel church with 12 windows at its entrance demonstrating the twelve (12) stones on Aaron’s breast plate i.e. the twelve (12) tribes of all the saints. The ceiling contain seven (7) beams demonstrating the seven (7) rainbow colors which demonstrates God’s covenant never to destroy the world with floods again, the eastern window offers sights of cross positioned on the highest peak at point two (2) a view that gives the Christians an opportunity to always look up to Jesus.
What is amazing about this structure is that regardless of its size, it consumed 79 cement bags and was constructed with intention of lasting at minimum 500 years before the weakening of the foundation. The adjacent two remaining points are crafted in a womb shape along with the main chapel that is big enough to accommodate 400 pilgrims thus very impressing to encounter while on safaris in Uganda.
By Siima simon peter
Uganda safaris/Uganda safari News
Prime Uganda safaris & Tours Ltd safari News