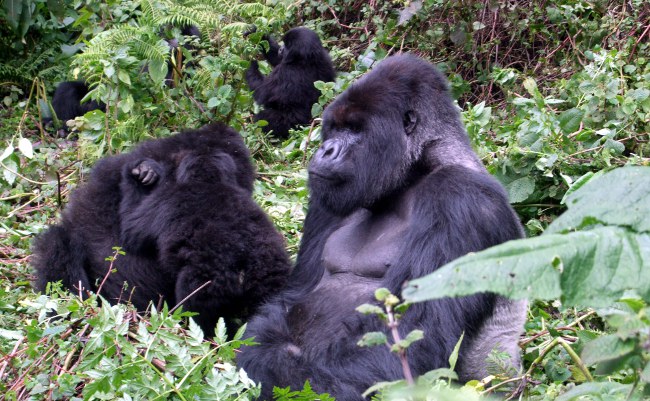 The mountain gorilla -one of the two subspecies of the eastern gorilla, has two populations. On a Uganda gorilla safari you will see one found in the Virunga volcanic mountains of Central Africa but within three National Parks namely; Mgahinga in south-west Uganda, Volcanoes in north-west Rwanda; and Virunga Mt in the eastern Democratic Republic of Congo (DRC). The other specie is found in Uganda’s great Bwindi Impenetrable National Park. It is clear to all primatologists that the Uganda Gorillas in Bwindi may be a separate subspecies, though no description has been finished.

These apes,-Mountain gorillas are proven descendants of ancestral monkeys and other African and Arabian during the start of the Oligocene epoch (34-24 m years ago). This fossil record provides evidence of the hominid primates (apes) found about 18–22 m years ago in East Africa. The fossil record of the area where mountain gorillas live is particularly poor therefore its evolutionary history is not clear. It was about 9 million years ago that the group of primates that were to evolve into gorillas split from their common ancestor with humans and chimps; this is when the genus Gorilla emerged.
Records show that by spring 2010, the estimated total number of mountain gorillas worldwide was 790.Uganda has more that half of this World`s Gorilla population.

Today Uganda the pearl of Africa has registered the biggest number of mountain Gorillas giving tourists that trek these mountain gorillas in Uganda higher chances of seeing them on their mountain gorilla treks or safaris.
According to a census that was based on Bwindi Impenetrable National Forest which is home to most of these wild life species.
A follow up has been made since 2002 registering 320 Mountain Gorillas in this census.In 2006 another but similar census registered 340 Mountain Gorillas and amazingly recently in 2012 the number of these great apes has risen to 400 Gorillas which covers the biggest percentage of the total number of gorillas in the world.
Despite this great wild life achievement, these great but shy apes are faced with a variety of challenges such as; competition for space due to congestion being conditioned to one space in spite of their increment in number yet their space of dwelling remains constant.This problem is very evident when these Mountain Gorillas get out of the forest directly bumping into peoples gardens and homes.
This not only causes destruction of crops but rather also endanger these Ugandan Mountain Gorillas lives as they many times attract diseases from people and in turn spread them t o people else where if there is contact. Among these diseases are; influenza, scabies, Ebola. Ma-burg just to mention a few.Once the infected Mountain Gorillas get back to their groups in the forest, they are likely to spread the diseases to fellow group members.
Despite the several challenges to the growth in numbers of Uganda`s Mountain Gorillas, having their numbers increasing in Uganda to this magnitude has made Uganda a remarkable Gorilla safari spot and the best tourist destination in Africa and the world at large.