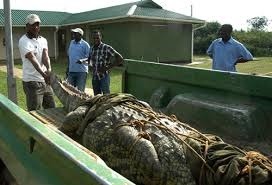 The increase in public outcry over the increase in the counts of crocodiles in fresh water bodies of Lake George, Kazinga Channel and Lake Edward which are always visited by travelers on Uganda safaris and tours, the Uganda Wildlife Authority (UWA) has hutched a plan on how these crocodiles can be captured and relocated to other place.
The Crocodiles are among the most dangerous Uganda safari attractive animals to human lives. They continue to threaten the lives of the communities in various landing sites of the districts of Kasese and Rubirizi. This plan has been affirmed by the Queen Elizabeth Conservation Manager Nelson Guma and that the personnel to hunt the dangerous predators and relocate them to other lakes where they can thrive without posing fatalities to communities is ready to take off. The Conservation Area Manager accepted that at the moment there are no other means to avert the crocodile crisis in the affected areas apart from capturing them. A crater lake in Rubirizi District has been identified as a safe haven for these creatures which are always sought for by travelers on safaris in Uganda though its name is still withheld.
Apparently Uganda Wildlife Authority is sensitizing the fishing communities seeking their cooperation in the hunt and the capture for crocodiles. The identified lake has got fish which will support crocodile populations but has steep shores that do not allow the crocs to wander to far places like how they have been doing on the flat shores of Lake Edward and Lake George.
The relocation of crocodiles is being considered at a time when the political leaders form the Areas affected have encouraged their electorates to resort to killing and eating the crocodiles following the failure by the Ministry of Tourism Wildlife and Heritage to attend to their counts of petitions.
However, the fisher men also offer them selves to these deadly creatures always encountered by visitors on safari in Uganda. They tend to drive to the breeding places for fish to bring out fish in times of scarcity something that is locally known as “kokota” which makes them vulnerable to crocodile attacks.

The counts of ten (10) fishermen are noted to have lost their lives to crocodiles at various landing sites in the districts in Rubirizi and Kasese districts. The attacks of Crocodiles were very common between 2010 and 2014 on water bodies of Lake Edward and Kazinga channel especially Katwe and Katunguru landing sites respectively resulting into counts of death and injuries.
The residents in Mid-March 2015 killed some wild animals and burnt plastic materials in protest of the loss of a fisherman who was attacked by a crocodile while fishing. The attack by crocodiles also affects the fishing businesses as the fishermen fear to go back to the waters after a loss of their colleague.
Uganda safaris /Uganda safari News
Prime Uganda safaris & Tours Ltd